What will Apple do with Passif? Part 2

I first asked that question in

August 2013, shortly after chatter around Apple’s acquisition of Passif surfaced.  I mainly thought about the, at that time, mythical iWatch.  I also started thinking about the technology that was outlined in Passif-related patent documents.  The thread appeared to go quiet until Apple’s September 7th Event.

Since the introduction of the AirPods at last week’s Apple Event there has been plenty of discussion around the capabilities of these wireless ear buds and the technology of the W1 chip.  One article on the Apple gossip blog 9to5 Mac discussed the various Bluetooth protocols and limitations.  An article in EETimes discussed the possible role of NXP’s near field magnetic induction (NFMI) technology.  At the time of writing, comments to the EETimes article, including those by the author, are leaning away from NXP’s technology and leaning towards some implementation of Bluetooth.

I think it is safe to conclude that the W1chip is an Apple designed chip.  At time stamp 91:25 of the Apple Event, Phil Schiller referred to the W1 as “Apple’s first wireless chip”.  The AirPod page on Apple’s website does use softer language, referring to it as the “custom designed W1 chip”.  I think the W1 silicon will support an in-house effort.  In both the Apple Event and their website there is emphasis placed on the battery life and audio quality.  From this one would anticipate low power consumption is central to the W1’s technology.

So where does Passif enter the picture?

It is time to throw my hypothesis on the table.  I would not be surprised if the W1 implements technology that was acquired from Passif in 2013.  There are a few patent documents from my 2013 article that always looked interesting.

In 2013 the ‘252 patent had not issued, but we could see the published application.  The representative Figure on the face page is very similar to the discussion we are having today i.e. the transmission of a wireless audio signal from a source to one or two speakers.  This Figure is reproduced below.  As outlined in the Background (col. 1, ln. 41-58) “standard protocols, such as Bluetooth or Wi-Fi or the like, …were not designed to reliably carry stereo audio traffic to left and right speakers”.  That sure reminds one of Phil’s comments and some of the subsequent articles.  The Detailed Description goes on to present architectures for wirelessly transmitting between an audio source and two speakers. 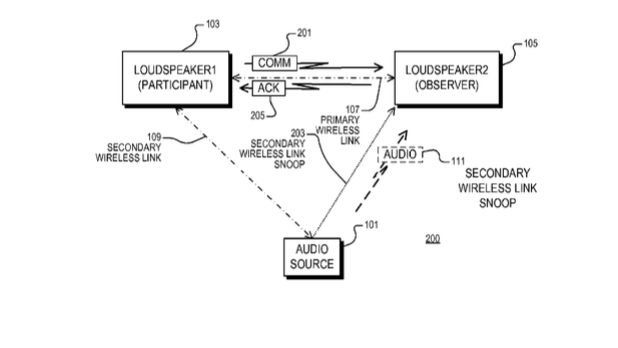 I spoke about the ’208 patent in 2013.  The Background of the ‘208 patent discusses the pros and cons of active and passive components in a wireless receiver.  It is indicated that active components lead to high power requirements when high performance is desired.  At the end of the Background it is said “… a receiver system that meets performance specifications … using low power passive circuitry, rather than current consuming active components, is desired.”  The Description then details embodiments that incorporate passive components.  Again, the objectives are similar to those espoused for the W1chip.

Obviously at this point I do not know of the specifics of the technology outlined in the ‘252 or ‘208 patent are being implemented in the W1 chip.  It does though appear that concepts around the technology used in the Air Pods was being thought about and developed by Passif years ago.  There are though still some open questions floating around. Is a standard wireless protocol used?  Is there a W1 chip in the iPhone 7.

Towards the end of the AirPod segment of the Apple Event it was indicated that new wireless Beats headphones are using the W1 chip.  This supports reports that the AirPods can be used with other audio devices or phones.  This ability in turn suggests a standard communications protocol, likely Bluetooth, is used between the audio device and the AirPods.  It also suggests there is no W1 in the iPhone 7.  That said a tear down of the iPhone 7 will let us know if the “magical experience” of the AirPods requires a W1 in the “audio device”.

In the end it will be interesting to see the silicon.  As pointed out in the comments of the earlier EETimes article it will also be of interest to get a scope on the W1 and see exactly what it is doing.  Both of these will go a ways towards an understanding of the W1 and Apple’s venture in wireless chips.  The W1 is likely just the beginning.