Cree® garnered some headlines today with a

Press Release  that jointly introduced a new family of LED light bulbs and revised guidance for the quarter.  I want to touch on the “bulb” portion of the release here.  The first thing to strike the reader when looking at the supplied photo of the bulb is that it looks like a traditional incandescent light bulb.  In terms of technology Cree draws our attention to their LED Filament Tower™ in the above Release.

An article at geek.com presents a nice photo (reproduced below) of the Cree bulb without the exterior glass, thereby showing the tower that lies within. This article goes on to mention:

“The design features pairs of XP-E LEDs in a ring around a central tower, inside of which is the driver circuitry. This design is modeled after an incandescent’s filament, but also is reminiscent of the out-dated “corncob” style LED bulbs. Corncob bulbs were somewhat popular but provided poor light quality, so have since been replaced with better technology. Cree modified this design and replaced the long columns of cheap LEDs with 10 pairs of high-voltage ones. Cooling the LEDs and fitting a driver inside the tower, all while keeping costs down, must have been a challenge for the engineering team.”

One could reasonably anticipate there will be IP around the tower structure. Even from the above excerpt one might speculate there is IP around the arrangement of both components within the tower and the LEDs themselves to provide for the required cooling.  Further, there might also well be IP in the overall geometry of the tower and its relationship to the bulb itself.  Cree of course has an extensive patent portfolio ranging from fundamental LED structures to phosphor arrangements to overall bulb or light fixture configurations.  It is therefore easy to assume there is and will be further IP around the technology to which they have drawn our attention.  We will be exploring technology associated with these new bulbs in more detail for clients going forward. 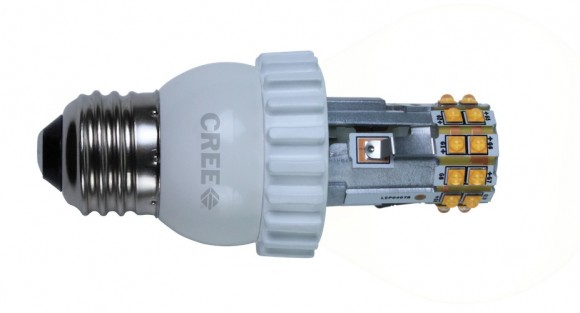