In the first article related to grid storage we touched on some technology associated with Ambri and their liquid-metal battery. In particular we dug down into some specific aspects of their battery technology disclosed in USP 8,268,471.

During the course of writing, Temporal Power and their flywheel technology came to the surface.  At the moment we are digging into technology behind their flywheel as disclosed in published patent application 2011/0298293.  There will be more on the ’293 application later, but all of a sudden there is a whole grid storage eco-system emerging.

Figure 1 schematically depicts four main technologies in the grid storage eco-system.  A bit of additional colour is added to the “battery” branch to depict at least some of the technologies therewithin.  The first sub-branch of these, no particular order, is liquid metal, which we have already discussed.  Moving to the flywheel branch the most famous of the sub-branches would be the bankrupt Beacon Power.  Similar to the battery technology branch the first sub-branch is for Temporal Power, which will be explored a bit more later.  The other two technology branches represent pumped hydro and CAES.  Figure 1 can then be seen as a basic organization of technologies within the grid storage space. 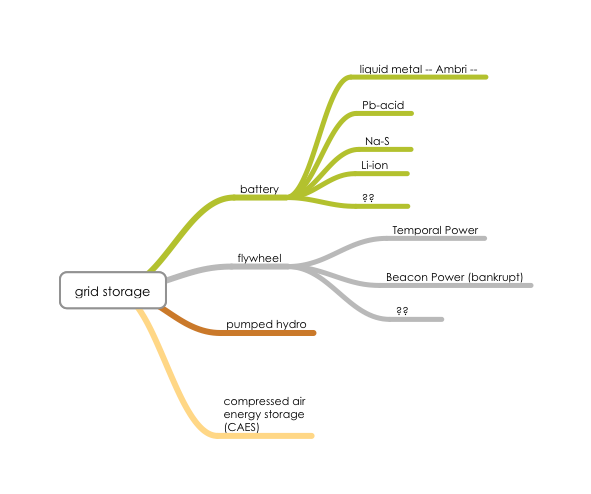 If we now move within a particular technology we have to look at its performance metrics.  Figure 2 presents some of these.  As before we have to start breaking the categories down into their constituents.  For sake of argument an “economics” and “performance” branch is shown.  The economics branch would consider cost aspects, having both start-up and operational components.    The performance branch is more technical, focusing on the abilities of the given technology. 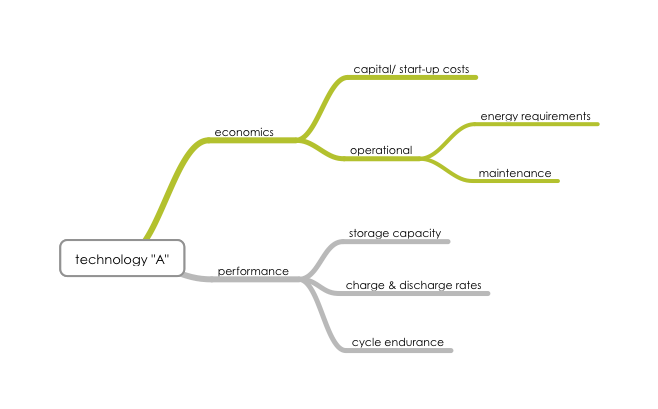 As presented in Figures 1 and 2 the grid storage field quickly expands into a matrix of information.  That said a bit of organization will assist in keeping the technologies and performance numbers straight as we follow this bit of technology that is gaining some mind share.