Our article on Ambri briefly touched on the notion that an important part of any grid storage system is the mitigation or minimization of energy required to operate the system.

In Ambri’s case one component of this is likely thermal management, to minimize the energy required to maintain the system operating temperature.

Temporal Power is taking a crack at grid storage with their flywheel technology.  So, what about a flywheel system? Where would energy be consumed during its operation?  In a flywheel the stored energy is the potential energy of the rotating flywheel.  An at least large factor in the energy lost during operation is friction.  A large component of the total frictional losses would arise from friction between the shaft to which the rotor of the flywheel is attached and the bearing, within which the shaft spins.  To this end one might anticipate that systems and structures for reducing friction are important and will form patentable subject matter.

Temporal has put up some impressive loss numbers on their website.  This claim would require control of frictional energy loss.  Enter published US patent application 2011/0298293 (‘293) assigned to Temporal Power.  ‘293 discloses a “Flywheel Energy System”.   The overall flywheel system is depicted in Figure 2, for example.  As pretty much expected there is a flywheel 24 within an outer housing 21.  The flywheel 24 has upper and lower drive shaft assemblies 24a and 24c, respectively, that themselves rotate within bearing assemblies of the housing 21.  Of interest here is magnetic thrust bearing assembly 26. Assembly 26 is nicely illustrated in Figure 4, which is reproduced below. 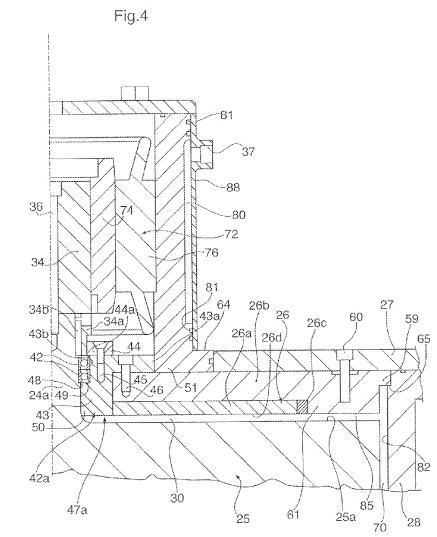 It is further  disclosed that assembly 26 contains at least one permanent magnet 26a.  Further detail and alternate embodiments of the assembly 26 are presented in Figures 6a to 7c and 8, and described between paragraphs [0050] to [0054] and [0066], respectively.

While other aspects to the reduction of friction are disclosed it is our first guess that  magnetic thrust bearing 26 plays an important role.  As always with patent applications it will be of interest to see the claims that issue.  In the meantime we will keep track of Temporal and the the commercial progress of their flywheel system.