areas of innovation in LED Lighting

I have written a few things

here and there about LED lighting.  These articles were inspired more by news releases at the time than a deep exploration of the technology of LED lighting.  That said it might be worth considering where technology development might occur within the LED lighting market.  For this I turn to a schematic block diagram of an LED bulb.

Figure 1 presents a schematic diagram of a conceptual LED bulb 100.  At the moment the bulb 100 is generic, representing the basic elements associated with any bulb geometry.  It has been divided into three sections.  The LED 102 is the actual light emitting element. There will in fact be one or more LEDs 102, with the number and arrangement being part of the overall bulb design.  On the input side of LED 102 are the power electronics 104 while the optical components 106 are located at the output side of the LED 102.  The optical components 106 may include, for example, one or more phosphors to convert the LED light to white light, a means for selecting or enhancing the desired colour spectrum, and a means of dispersing the light to achieve the desired distribution thereof. 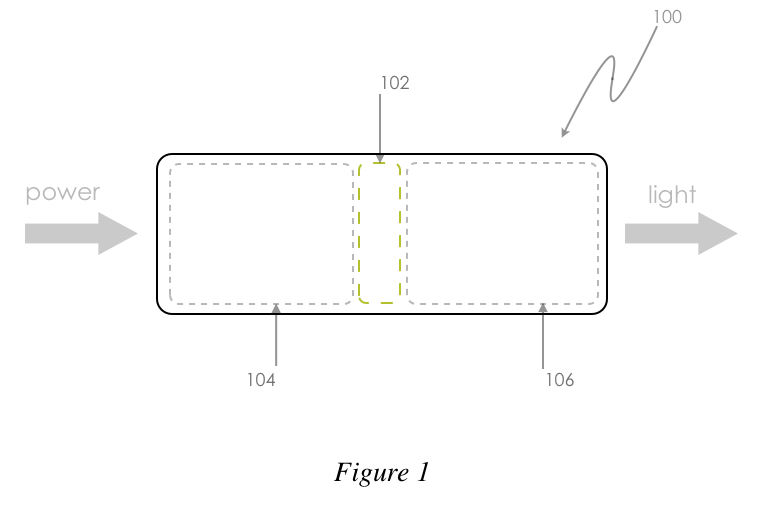 Only considering companies about which I have written, Cree develops both the LED 102 and the optical components 106 while Rambus appears to be largely working in the area of the optical components 106.  While the power electronics 104 would contain specific integrated circuits designed by companies such as Power Integrations, a given company developing a bulb 100 may well have some part in the power electronics 104.  This may take the form of reference design selection, component selection or design of board level circuits.  Finally, the overall design of bulb 100 will be a function of the optical and heat dissipation considerations associated with its intended use.

Highlighting just two articles, there was a bit of local press here and here at the time of recent government funding.  Between these articles we are told they are not involved in actual LED 102 development, rather focusing on the optical components 106.  There is also mention of design of the overall bulb for heat dissipation considerations.  To quote Leapfrog’s CEO Stephen Naor “… the Leapfrog intelligent optical technology reduces the glare of raw LED light, improves scattered light distribution and fixes unpredictable colour consistency.”

The question now though is how are they doing this?  Looking at the photographs of the bulbs in one article one element of the Leapfrog bulb appears to be some sort of light guide between where one would anticipate the LED 102 and the front of the bulb 100.  Any such guide would likely be working with other specific design elements including positioning of the LED 102 and the reflective housing.  A first search though has not located any published patent documents either assigned to Leapfrog or listing anticipated inventors.  It will be of interest to see what information about their technology has been disclosed when any patent applications are published.  One thing that can be said is that, as might be anticipated from such a large potential market, there are plenty of issued and pending patents for all aspects of the bulb 100.