It might actually be an illness. Maybe one named titleclickia or something like that. It would be defined as the uncontrollable clicking on a link based on the title.

In extreme cases the afflicted will read the whole article at the end of the link.  Now that I have admitted the problem I can move forward.

There was not too much coverage of Apple’s published patent application 2013/0084796, but a few feeds made me aware of it.  The original post seemed quite excited about the whole thing.  I am not going to go into too much detail about ’796.  Suffice to say I had a much different impression about the application than the coverage that led me there.   Discussing the patent bargain though does come to mind.

I have spent some time here before.   In this discussion I want to emphasize that it is becoming increasingly rare to find a wide open field where one can obtain broad claims.  In the case of the broad concept of the ’796 it is very likely that there is some related art out there that predates the filing date.  An electronic device with a detachable display does not seem ground breaking.  Does wireless help?  What is more likely is that there is some aspect or aspects of the disclosed technology that may be novel.  One then might ask if these concepts are likely something that was invented or are they simply a result of evolving technology.  I have my ideas on this, but this is neither the right forum nor is it for me to decide. 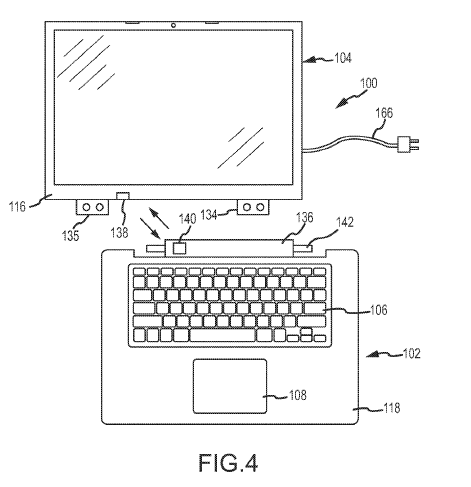 Apart from the patentability of any of the disclosed concepts within ‘796 one should ask if these concepts are likely to be implemented in a product.  There do seem to be many questions raised by the disclosed scenarios.  For example, how many batteries, even smaller or secondary ones,  are there between the base 102 and the display 104?  Is there logic in both of these?  What would the power consumption associated with the transmission of “display” information be?  What is the extra cost associated with the “display” communication and possible wireless charging capabilities?  At the moment I think physical connections still have their place.  Finally, I really like the very unApple picture of a display with a plug depicted in Fig. 4.