So the first go did not lead too far. There were however a few more leads in the first round of articles that could be pursued.

The original Press Release told us that the company is an MIT spin-off and the technology field is DC-to-DC power conversion.  What about the Technology Review article?  In the third paragraph it is stated “Its technology is based on switch capacitive techniques…”.  This is the second lead.  That should be enough for further searching.

Now, as described in part 1 no patent documents were located with Arctic Sand as an assignee and no relevant documents were located with Dr. Shalaby as the inventor.  Next, as Arctic Sand is an MIT spin-off the early IP might be licensed from MIT, to which it is assigned.  If we integrate this with the second clue into a search of published documents at the USPTO we arrive at US 8,212,541 (‘541), whose face page is presented below.  Before ploughing head first into some of ‘541’s technical details it must be noted that no direct link between the ’541 patent and Arctic Sand has been found.  It is however noted that the lead inventor, D. Perreault, is associated with another spin-off named Eta Devices, Inc. that is developing other bits of  IP for which he is the inventor.

And now for some technical stuff.  At col. 2, ln. 16 of the Background limitations of current switched capacitive DC-DC converters are presented.  It is noted that the chief of these is “relatively poor output voltage regulation in the presence of varying input voltage or load.” The Detailed description presents an embodiment to address this limitation.  It is however another embodiment that is introduced at col. 12, ln. 64 that appears to be focused a converter with improved efficiency.  The description of the structure begins with reference to Fig. 5.

In the end it will be interesting to see how this story unfolds, including more specific details about the technology involved and whether it is associated with or stems from that disclosed in the ‘541 patent .  Another lead has indicated that Arctic Sand “…is forming a top notch engineering team with industry experience to build innovative revolutionary products and expand its IP portfolio”.  At the very least there should be patent applications in the pipeline that will be visible in due course. 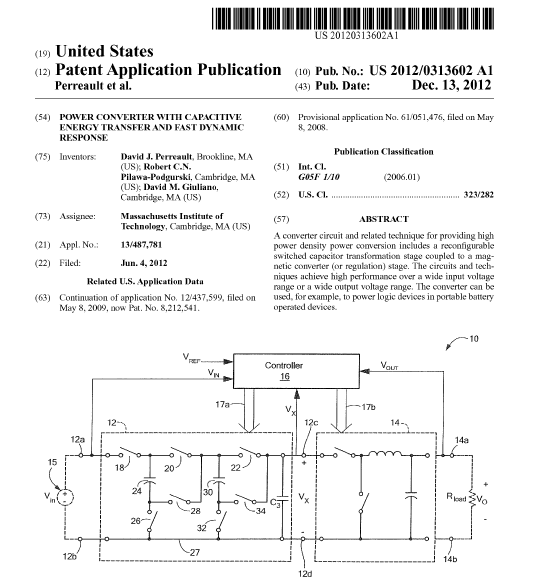