There was some coverage

here and here around a January 14th Press Release announcing Series A funding for Arctic Sand Technologies Inc (TM).  The coverage however focused on the contents of the above release, distributing the information to a wider audience.  In the end, there was little being said about the actual technology.  If you add in the fact that a corporate website has not been located it appears Arctic Sand (TM) is still in stealth mode.  But, even ignoring the claimed efficiency numbers there is enough in the release, including the listed investors, to warrant some intrigue.  It was time to do some digging.

The first search of published applications at the USPTO did not find any documents assigned to Arctic Sand.  This was not really unexpected as early stage companies usually gain publicity within the 18 month publication window of any filed patent applications.  Nest thermostats is the first example that comes to mind here.  How about a search with an inventor’s name?  Again we are a bit shy on information.  We do not have any such names other than Nadia Shalaby.   Since Dr. Shalaby is the CEO and co-founder there is a reasonable chance that she is an inventor of early IP.  A search with her as an inventor came back with four documents, three of which are entitled “Universal Hitch with Integral Articulation, Clamping and Locking”.

One of the returned documents was US2011/0229253, which has issued to USP 8,202,017.  The face page of this issued patent is presented below.  The representative figure shows a hitch that may be used to attach a child’s trailing bike to an adult bike.  With no disrespect this is very much an “old school” mechanical patent.  On a tangent it is always fun to read the claims of this genre of patents to catch terminology such as “gripping” and “connectable”.  It is too bad we do not have “rotatably” or “extendingly”, but I digress.  In the end this vein was a bit of a red-herring and probably represents a solution to a problem Dr. Shalaby encountered in everyday life. 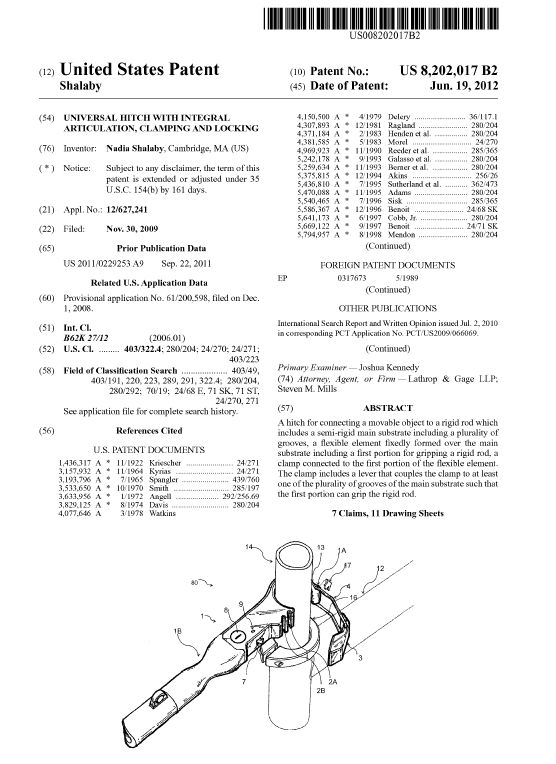