cnet, Forbes and AppleInsider.  Patents assigned to Apple seem to get attention.  AppleInsider’s coverage was  a day ahead of the other two.  Each of the articles had their own interpretation of the disclosed technology, and each presented the sort of coverage that often hastens me to begin typing.

Without detracting from the merits of the invention it is fair to say the Forbes article was a bit over exuberant. In particular, the information in this patent was filed with the USPTO on September 30, 2008 and it was published in April 2010.  It is not a new revelation with four and a half years passing between when the inventors disclosed the details of the ‘654 patent and today.  The issuance of the patent does not signal any immediate product release or technology introduction.   But, enough, it is time to look at what the ‘654 patent discloses and where the technology might fit into the broader picture.

“Integrated Touch Sensor and Solar Assembly” is actually a fairly descriptive title.  It is certainly much more so than the infamous “Semiconductor Device”.  The gist behind the disclosed technology is reasonably straight forward; integrate a solar cell within a display’s structure so as not to require extra surface area on the device.  Current displays provide for both a touch sensor to detect gestures and, well, a display.  Now, you want to integrate a solar cell.  To this end you need to develop technology that integrates this third functionality into the display real estate.  The integration of a solar cell and display e.g. LCD is known.  One can look at US 5,886,688 or US 7,136,138 assigned to National Semi,. and Citizen Watch Co., respectively, as early examples of technology around this.  But, in today’s devices you also want a touch sensor, so you have to build technology to do that.  This is where the ’654 patent is found.  There is not much mention of an LCD or, more generally, the display component.  That is fine though, because the ‘654 patent is more directed to technology to integrate a solar array with a touch sensor.

In terms of the electrical connections thereto and basic geometry thereof a solar array is different than a touch sensor.  To this end the geometry of electrodes is of interest.  Figures 10 and 11, of the “654 patent, discussed between col.5, ln. 56 and col.11, ln. 12, disclose a typical electrode configuration for a solar panel and an electrode pattern that may be used for an integrated solar panel and touch sensor, respectively.  In this latter case the electrodes are arranged to provide quadrants, or pixels (my terminology).  Of course these quadrants are important to detecting something, particularly in motion, across the display. 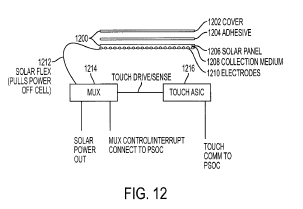 The control of this system is of particular interest.  Namely, the electrodes 1210 perform double duty, if you will, where they can operate as the electrodes for the touch sensor and the solar array.  As such the Disclosure presents considerable discussion about the hardware and software means that might be implemented to select the functionality of the structure at any given time.  This would include retrieving power from the array and/or sensing capacitive signals associated with touch sensing.

Finally, the discussed means are presented as also allowing the implementation of an optical sensor.  In this case the quadrants of the electrode array are monitored for their energy output during operation as power generation.  The output of the collection medium 1208 is then monitored to determine if an object e.g. finger is approaching  and or moving.  A discussion of this operation, which is shown in Figure 18, is presented between col. 12, ln. 45 and col. 13, ln. 8. 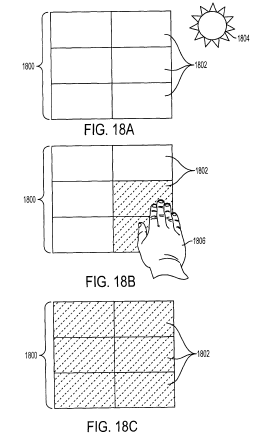 In the end the technology disclosed in the ‘654 patent is a building block in the overall structure that might be implemented in the integration of a solar array in a display structure.  There are other aspects to this overall structure and there will likely be other patent applications along the way.  These will disclose other structures and/or present solutions to problems that have been encountered in the technology development.