OK, I am a bit late writing about the “iRing” patent application that was published at the start of October, but that is life.

posted by Paul Boldt
in Apple

I also have to admit feeling a bit lazy when I looked at the published application i.e. 2015/0277559 a.k.a. ’559.  I can say though that I read the first or face page, looked at all the Figures and read the applied-for Claims.  The Detailed Description is for another day, possibly.  Oh yes, I also read the original AppleInsider article.  Armed with this set of information I had some fun thinking about what Apple might be telling us about an iRing’s potential.

First, I agree with AppleInsider that, at least on the surface, the device configuration appears to be another possible configuration for the set of the features that now appear in the AppleWatch.  Was the ‘559 application thus another possible configuration that, in the end, wound up on the editing room floor?  That is certainly a possibility.  A piece of hardware of a certain design, a touch-sensitive display, a haptic feedback system, a camera …. blah, blah, blah … we know the script.  How many devices do we really need to provide notifications and receive input?  However, if you let your mind run a bit it gets more interesting.

I want to focus on Figure 6C of the ‘559 application.  It is reproduced below.  At first glance you might say; how am I going to select something or input information on such a tiny display?  Forget that, how am I going to read anything?  I know that was my first reaction.  But, look at the Figure again.  It does not show a simple input on a touch screen.  It shows input from one’s thumb when the ring is located on the index finger of the same hand.  We are shown input with a single hand.  This is different. 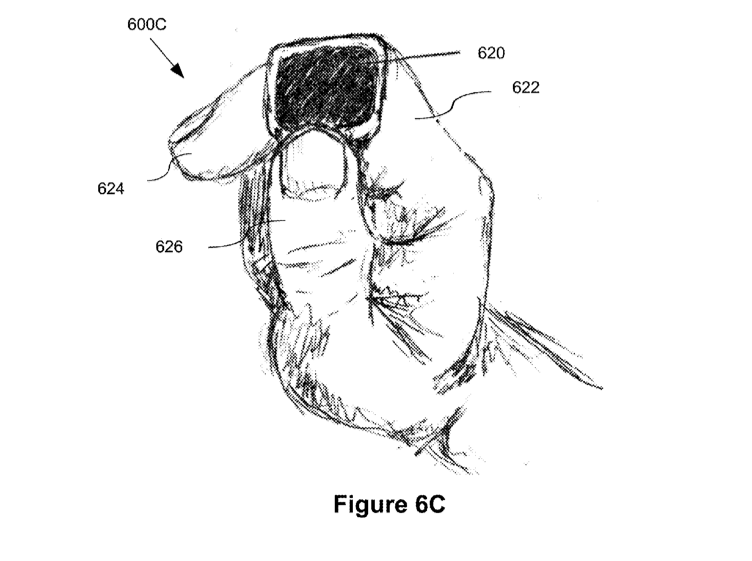 Here one does not have to look at the display of a device that is on your wrist or your finger and use the other hand to enter commands.  In this latter scenario both hands are in use.  In Figure 6C it is one-handed operation.  This cannot be done with a watch.  All of a sudden the use scenarios hit you.  Let’s say a reminder pops up on your calendar and you are notified, via the ring’s haptic engine or maybe a colour coded message on the display.  One could then respond, maybe a yes or no, with one hand while the other is maybe holding to a strap on the subway.  Yes the feedback might be limited in scope, but it is there.  It might be enough to communicate simple, select messages. This type of operation might be very lucrative in particular situations.

The AppleInsider article also comes back to the so-called iRing rumour of 2013.  I also wrote about it at the time.  I want to come back to one use scenario I envisioned i.e. the TV remote.  The use of any input device on a finger or wrist, I think, becomes interesting when it is used for motion sensing.  Maybe it is a kind of virtual mouse.  What if a TV or computer screen had a series of options or icons that one could select simply by pointing?  Again the sensor could be calibrated with respect to an initial position i.e. point to a first icon.  Here though you have another level of input, just like Force Touch, where you can select a depth of items based on the one-handed input of Figure 6c.  This is where it gets interesting.

As I have said many times before, it is interesting to think laterally.  There are often clues given in patent documents that lead to further, possibly very interesting ideas.  On one level watching the iRing discussion is a bit of fun. On another level the iRing’s form presents some neat device interaction possibilities. It is also worth reflecting that device interface that is common today would have been considered fanciful a few years ago.  Will there be another product category from Apple?  I do not know.  There are though some interesting ideas floating around.