apple’s fuel cell “patent” – what is the broader picture?

It always seems to start the same way.

First, I read an article or two about some patent that has come to light. They usually contain overly broad statements of how the technology will appear shortly, the patent covers everything, or someone else has a patent that covers everything.  Second, I question whether I believe their interpretation of the patent. Third, I read the patent. In the end I say “ … thanks for pointing to this”, and stick with my reading. Apple’s US2015/0249280 (‘280) published patent application is a case in point. Here, I want to consider three basic questions. What does the patent disclose, where does it fit, and should one anticipate imminent use?

The ‘280 application considers a “Fuel Cell System to Power a Portable Computing Device”, as the title reads.  All of the coverage of it I saw seemed fixated on the incorporation of a fuel cell into an iPhone.  However, that is not the way I read the disclosure.  If we jump to Fig. 1B, which is reproduced below, the fuel cell system 100 is drawn as separate from portable electronic device 120.  The two systems are connected by power and communication links, 112 and 114, respectively. The discussion of this structure begins at paragraph [0034]. Yes, both may be internal to the phone, but I do not sense that is the configuration.  I see them as separate from one another. 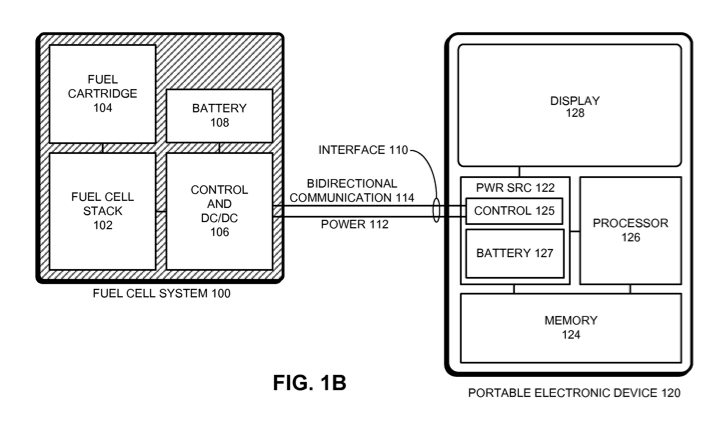 If we now go back to Fig. 1a we see the isolated fuel cell system; including the interface 110.  The connector in this diagram appears similar to a magsafe-type power connector.  The simple presence of connector 110; having a familiar design, again suggests the fuel cell system is external to the portable device 120.  After reading the specification much of the described physical structure and configuration appears to be structure needed to support other more central aspects of the disclosed technology.

I now turn to Fig. 3, which is reproduced below. Fig. 3 presents a flow chart illustrating how a portable device might control a fuel cell. It is indicated in paragraph [0055] that state information is communicated from the fuel cell to the portable device and control information is communicated in the reverse direction. In other words, one collects data on the instant fuel cell operation and feeds this into a control system which calculates parameters for operation i.e. control. Thus, the technology considers “smart” control of a fuel cell.   I think it is safe to assume that an objective is to improve the operation of the fuel cell, thereby reducing fuel consumption. It might also be an objective to provide an output that considers the best operation of the battery. 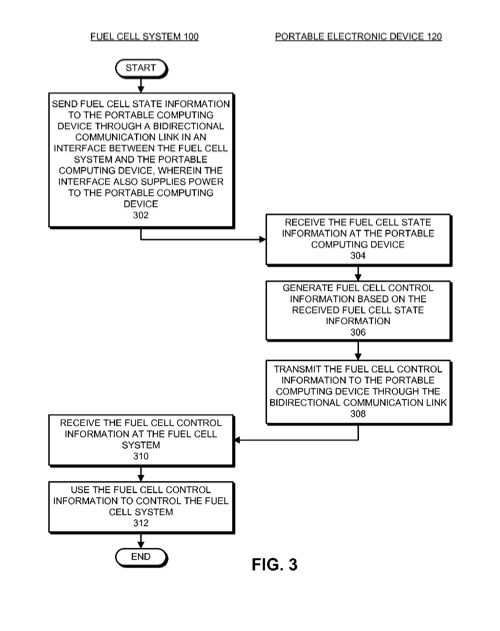 where does it fit?

How might the technology be used?  A smartphone requires charging.  One selects an external fuel cell-based charger to do this.  When the charger is connected to the smartphone electrical and communications links are established.  Operational data from is collected from the fuel cell during charging by the phone.  Then, in turn, the control unit operating on the smartphone controls the operation of the fuel cell.  It is noted that the location of the control unit is not definitively stated.  While it may be located within the charger it seems more likely it would be implemented in the portable device or smartphone.

The short answer is; I don’t think there will be any immediate use of fuel cells to charge phones.  First, consider the basic structure and operational details associated with an internal or external fuel cell.  Yes, there are people working on an internal fuel cell, but I suspect there is plenty more work for a practical realization.  One first has to think of size and fuel supply.  Second, and maybe more importantly, are operational considerations.  Some of these were detailed in the AppleInsider article.  I do not think these are minor.  One might question if the purported battery life is worth having to now buy fuel.  We know most homes will have electricity, but will there be a store selling fuel packs around the corner.  I could imagine a scenario where you need to recharge, think you have a fuel cartridge, but in fact do not.

In the end the ‘280 application outlines aspects associated with the control of a fuel cell.  It presents a particular bit of technology that would require advances in other areas for the disclosed technology to be implemented.  The use of fuel cells in portable electronic devices does though touch on some interesting use considerations, including the balance between potentially longer battery life and convenience of use.