the numbers game – supporting your position

When you want to be convinced you say “Show me the numbers”. It is a common refrain. Numbers can be very convincing. They can also be easily manipulated to reinforce a particular, desired position.

posted by Paul Boldt
in Ottawa

It was many moons ago that I took Engineering 1H3 with Dr. Hudspith  at McMaster University.  The course included sections on drafting, societal responsibility and ethics.  It was the first time I was truly introduced to the concept of manipulating the presentation of numbers to support a position.  Figure 1 presents a graph similar to one that I clearly remember from the course.  All looks fine and one anticipates a linear relationship for the data.  However, there are two points beyond the end of the x-axis that do not fit this relationship.  The points are there, but the axis is drawn to exclude them, and highlight those points that fit the desired relationship.  There were great laughs in the class at this “comical” example.  It has not turned out to be comical.  I keep seeing it over and over. 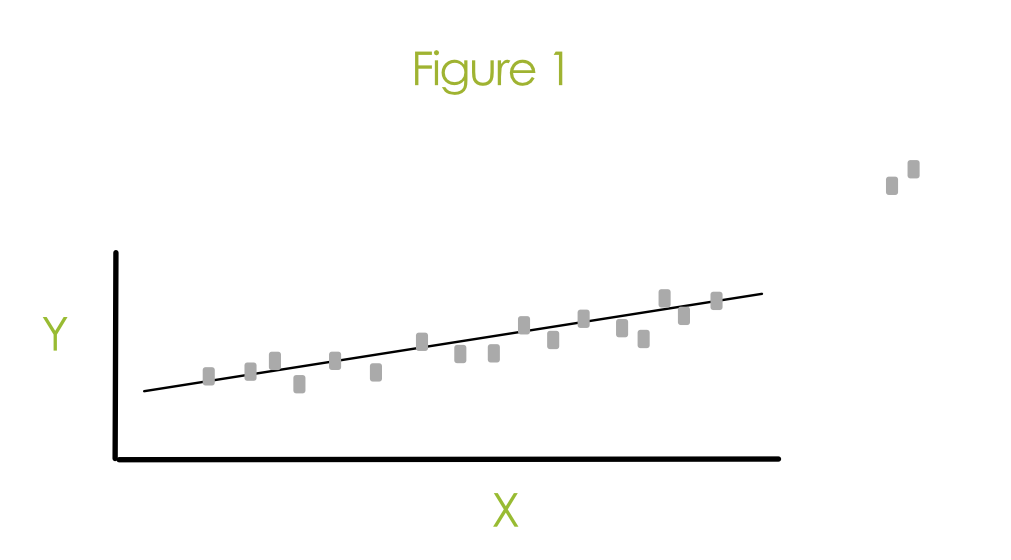 Early in my work career I was involved in a litigation between two semiconductor corporations.  I worked on the process, or fabrication side of the case.  Our client was presented with a series of arguments against their position.  One of these was a Secondary Ion Mass Spectroscopy (SIMS) analysis of the constituent elements of a structure versus depth.  The concentration of elements was plotted along the y-axis and the depth (into the structure in question) was plotted along the  x-axis.  It was argued that the plot did not support our assertion of the presence of a particular material because a “signature” element was not found.  The problem though is that the x-axis i.e. depth was skewed to only show the initial bits or start of the analysis.  In fact, it only showed the depth for which any signal is known to be noise from surface contamination.  The numbers were correct, but they only presented the noise.  They did not show results deeper into the structure where the signature elements would have appeared.  Thus, the presentation of data was biased to support their position.

The next example was from a very different, personal aspect of life.  At the time of our first child my partner was of an age that genetic testing of the fetus was recommended.  Our family doctor gave us a small fold-out pamphlet that “explained’ the rationale for the testing.  I remember the chance of Down Syndrome was approximately 1/750 for her age.  An exact number was given.  It was then indicated that the chance of a miscarriage from the test procedure i.e. amniocentesis was “small”.  However, when we dug a bit more I recall that the number for the latter was approximately 1/250.  That is in fact a “small” number, but it is 3X the chance of Down Syndrome.  So, there would be a greater chance of miscarrying the fetus than the chance the fetus has Down Syndrome.  In the end, the author of the pamphlet only published numbers on one side to support their position.

Finally, is the case that brought all this to mind.  I recently read an article about investments for Tax Free Savings Accounts (TFSAs).  The article considers investing in individual stocks and a “well diversified portfolio”.  The individual stock option is presented as a “bet” or “gamble”.  In terms of numbers, the presented example results in a $1000 loss i.e. one year’s $5500 contribution becomes $4500 after one investment.  This is where the scenario ends.  There is no time frame provided and no further investing indicated.  On the other side is the well diversified portfolio with a hypothetical (the future has not happened) return that compounds for 30 years.  In the end the investment is worth $34000.  One remembers two numbers; $4500 on one side and $34000 on the other.  One investment does indeed look much better than the other and one is drawn to the desired conclusion.  But, the lack of information for the individual stock side makes an honest comparison of the numbers, or approaches, impossible, to say the least.

Numbers are powerful elements of an argument.  They can though be easily manipulated to bias us to a desired position.  Unfortunately, this is all too common and all too commonly overlooked.  If I had experienced this before 1H3 I do not think I would have laughed.