You often come across bits of information that are of a very different scale, are of unknown relevance, yet may be connected by the same technical thread. Two such pieces recently appeared while keeping in touch with the phase change memory (PCM) saga.

Ordering simply for the sake of discussion, the first is an article by Ron Neale appearing in EETimes.  The second is published patent application 2012/0002046 (‘046), assigned to Micron.  I say these are of much different scale because Neale’s article presents a synopsis of some recent work around the technical challenges associated with the PCM unit cell.  ‘046 on the other hand is a patent document.  A patent document from a mature company in a heavily researched and, by extension, patented field.  So ‘046 is the piece of information that is, without commenting on the significance of the invention described therein, of a much smaller scale. Now let’s consider the thread tying these two together.

The thermal energy required to toggle a memory cell between states has been a long standing concern for PCM.  To this day not much has changed.  Neale’s article is an interesting read on the current thoughts on and research around PCM.  More particularly it considers two recent approaches to lowering thermal loading.  He first digs into designs for the interface between the phase change layer and the lower electrode to “confine the active region and minimize reset current”.  He also considers/ reports on work at IBM that considers the “golden composition”.  Very simply this is a very specific tweak to the  phase change material composition, providing improved characteristics therefore.

‘046 also touches on thermal loading, albeit from a different angle.  Fig. 2 of ‘046 presents a representative embodiment and is reproduced here. Centrally located in the figure is phase change material 56.  ‘Below’ phase change material 56 is first electrode 52 containing resistive heating element 64.  So far so good.  On either side of material is a piezoelectric element 58, which are in turn connected to electrodes 62A and 62B.  In this embodiment then, as disclosed between [0040] and [0042], the piezoelectric elements are configured to stress the phase change element and alter the activation energy between phases.  In the end another approach to lowering the thermal loading.

Two bits of information fitting into one large puzzle. 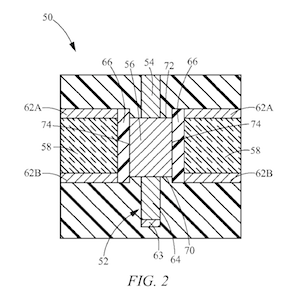