is the title of the first published nest patent application, which appeared the other week as

US 2012/0065783 (‘783).  Thought experiment no more.  It is the time to start gaining insight into aspects of the technology behind the nest thermostat.  In the previous article it was hypothesized that patent applications disclosing systems and methods around software algorithms and methods of operation were more likely than applications disclosing a particular hardware configuration.  The subject matter of this first published application is proving us correct.

In the thought experiment a few broad method steps were presented.  Albeit there is only one data point but the content of ‘783, including the Background, suggests the broad art in the field of programmable thermostats is gone.  To this end ‘783 discloses aspects of a thermodynamic model and its updating.  This model would then be actively used by the HVAC control unit in determining control settings for achieving the desired temperature.

In a bit more detail.  Figure 10 of ’783, which is used as the representative Figure is reproduced below.  It appears to give a gist of the overall picture, including interaction, between the HVAC unit 1010, the thermodynamic model generator 1018 and the model updated 1020.  Figure 4 presents more detail on inputs that might go into the generation of a thermodynamic model.  As a first impression the “brains” behind the nest thermostat appears to think about a lot more than the time, set-point and temperature that most “programmable” thermostats ponder. 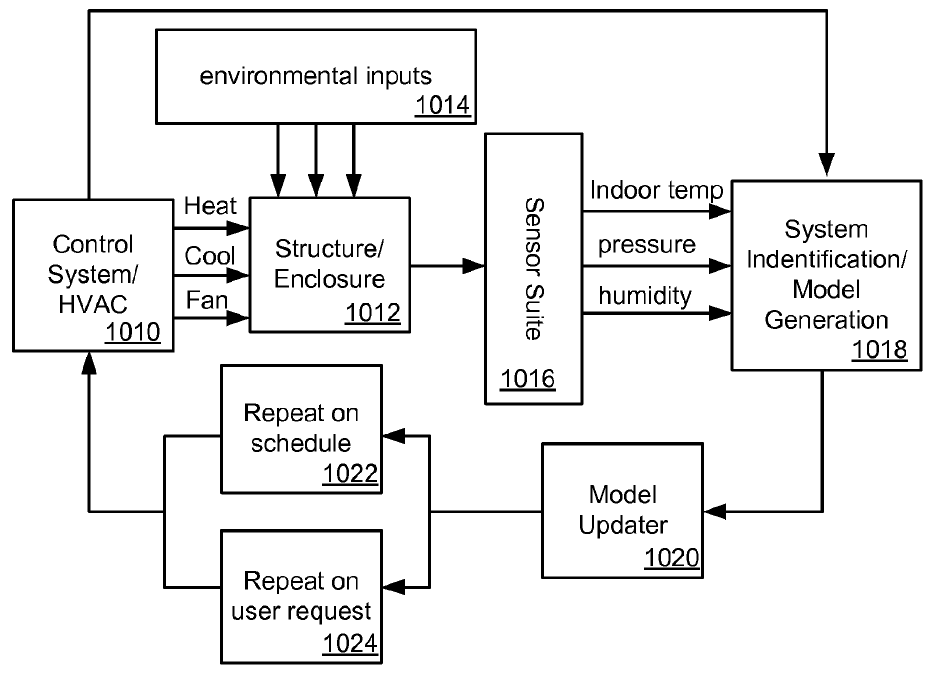 In the end the art cited in the’783 Background suggests considerable sophistication in the operation of various HVAC controllers.  Considering this and the nature of this first visible nest application one might anticipate subsequent nest applications disclose additional particular aspects of logic/ algorithms for a control system.  While the broadest art may be public these particular aspects  may certainly disclose important improvements in the field.  One likely measure of this is any realized energy savings.  If these approach those in nest marketing material there will certainly be weight behind the nature and details of the nest approach to HVAC control.