the M1 and Apple processors past

Apple’s introduction of the M1 spawned many articles.  I wanted to digest the initial wave of them before writing.

Then this article was promoted by a prominent Apple pundit.  I thought my “angle” on marketing had narrowed.  But, the more I read, the more I felt something was missing; something was unsettling.  It was one paragraph in particular:

Apple needed to reach the highest level of engineering expertise.  It needed to build a loyal, worldwide customer base.  It needed the financial stability (and raw nerve) to make a radical fundamental change to its business that is already thriving.

This really should be dissected, so let’s step back a bit and spend a few cycles thinking about the M1 and how it came to life.  Then we can look at what the M1 means to Apple and how they are marketing it.

The cited paragraph leaves the impression that Apple waited until the various pieces were in place before the move to the M1.  That is sort of true, but it is silent on an important point.  All of the mentioned pieces, including the worldwide customer base and the financial stability, were in place because of the A-series processors in the iPhone i.e. the ICs that led to the M1.

The A4 saw the light of day in the original iPad and, later, the iPhone 4.  It looked quite similar to a Samsung part of the era, but the ball was rolling, so-to-speak.  When you look back, Apple acquired the PA Semi. design group, and their StrongArm technology, in the spring of 2008.  This was just two years after moving to Intel processors.  I would bet that Steve Jobs had visions of putting his own processors in the Mac when he was on the stage with Intel.

It is safe to say when the A4 arrived the iPhone was not the juggernaut it is today.  Revenue from the iPhone 3 i.e. the model before the A4, may have already been near that of Macs.  Revenues were for sure ramping and the iPhone was gaining the world’s attention.  It is also likely that iPhone revenues were on a steeper trajectory than the Mac’s.

Apple kept acquiring talent and kept designing.  By the A6’s arrival Apple was designing its own CPUs.  This was no small achievement.  The GPUs would be several years later.  And yes, there were many doubters about Apple’s move to its own processors. Why don’t they use Intel? They can’t keep pace with Qualcomm … and on it went. But, with each generation the iPhone became a larger, and larger revenue stream.  Along the way, Apple was described as a phone company that happens to make computers.

By the time the M1 came along, and no revenue had yet been realized from it, Apple was approaching $100 billion a quarter in revenue.  Hardware for the largest chunk of this used Apple silicon, in all its forms.  The moral of the story; the hard work of achieving a worldwide customer base and financial stability was built on the development that led to the M1.

Apple did not wait for the various pieces to be in place.  Apple put them in place with their own silicon design. So, the largest gamble, the radical fundamental change to its business that was already thriving was the A4.

how is Apple marketing the M1?

Apple has always had a MHz problem.  Everyone knows you can only sell chips by quoting MHz and MBytes (of DRAM). The number of cores came later.  Every propellerhead out there wanted to boast about the MHz of their machine.  But, Apple was not very good in this odd machismo-like competition.  They were always explaining.  In the PowerPC era Apple’s machines ran at lower MHz and came with fewer MBytes. They had to explain that they were more efficient.  Most pundits simply shrugged.

The A4 came along at 1 GHz and had a single core CPU.  Apple was already behind in the race.  Again, “we are more efficient and we don’t need as much” was the line.  Again, pundits shrugged.

The Intel era seems like a dream or altered reality for Apple.  It was a world that was not really them.  They were shoehorned into an uncomfortable situation.  They were quoting the MHz like everyone else, because they used the same processors.

Then came the M1.  It was Apple’s moment.  Tim Cook has often said the Mac is the heart and soul of Apple.  Enough of the jibber-jabber, how is Apple marketing the M1?

Make no mistake, Apple is very proud of their offspring.  They are so proud, they showed us a baby photo in the Keynote.  More precisely, they showed us a photograph of the substrate, or base, for the 16 billion transistors after all the layers of the IC had been stripped away.  It is a coveted piece of information to the reverse engineers, and Apple was giving it away for free.  “Here you go … here is our baby”. 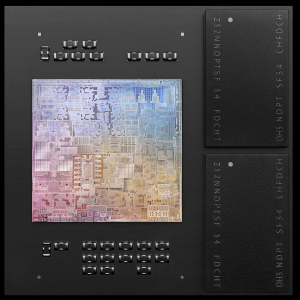 However, to the vast, vast majority of people this is meaningless information.  It will not help sell Macs. So, enough already, how is Apple selling the M1?

Steve Jobs always said he wanted to sell a user experience.  He did not want to sell performance.  That is the strategy for the M1.  There is no mention of MHz, or GHz today, sullying the M1’s reputation.  It does not have to stoop to that level.  Reference to the number of cores is more of an internal placeholder.  As more M-series ICs emerge they will likely be differentiated by the number of cores, which in turn will help set pricing.

In many ways the M1 realizes Steve Jobs’ ideal of selling user experience. It is the culmination of an incredible design effort. But, make no mistake, the heavy lifting that led to this point was done with the A-series.  The biggest risk was taken with the A4 in 2010. Apple is simply reaping the rewards of their gamble and conviction a decade ago.