I am a few days late to the thread, but such is life. At this point I am not sure how many articles are actually out there. I will only consider three;

one from autobloggreen (abg), one from MIT’s Technology Review, and one from GigaOM.  In reading these articles and USP 8,471,521 (the ‘521 patent) I was drawn back to Tim Burton’s Alice in Wonderland.  At times it felt a bit like I was being led down a rabbit hole, without a dragon slaying at the end.

All three articles appear to suggest or leave the impression that the ‘521 patent protects an actual physical battery system containing a metal-air battery and a non-metal-air battery.  This is the first rabbit hole.  Grabbing the first few words of claim 1 tells a different story; “A method of extending driving range …”.  The claims then, generally, present methods of operating, or controlling, a battery system having a first and second battery pack. 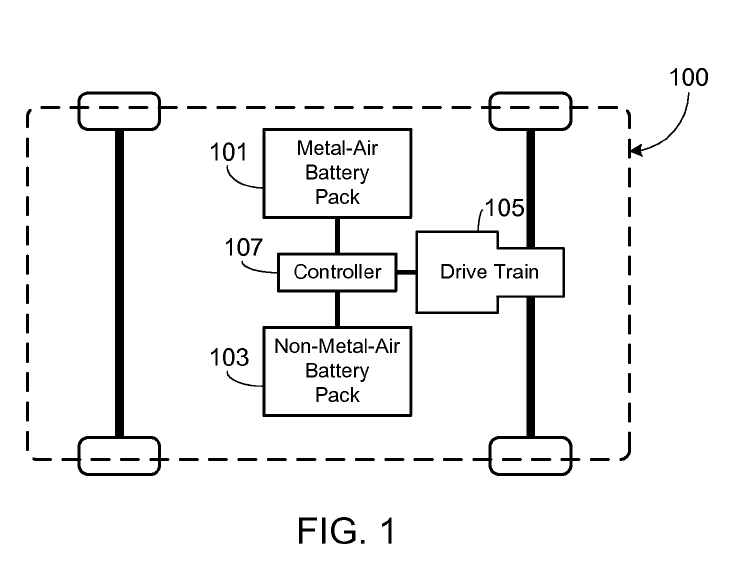 In terms of the the methods of the ‘521 patent the paragraph beginning at column 5, line 55 is worth a read.  It is also noted that Fig.’s 3-8 all present flow charts or algorithms of methods used in the control of a hybrid battery system.  Further, one can very quickly turn to the claims, which define the legal protection afforded by a patent.  Each of the claims begins with “ A method of extending driving range of an electric vehicle …”.  The claims then include specific steps and any limitations of the method.  So, the ‘521 patent is less about a physical hybrid battery system and more about the methods of controlling such a system.  In saying this I am only commenting on the discussion around the ‘521 patent and not passing any comment on the patent itself. 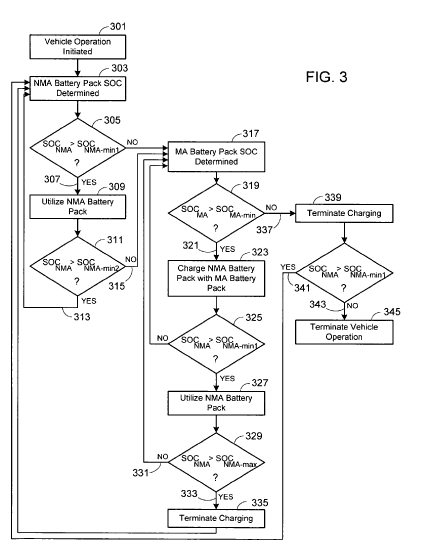 OK, so what can we say about the three articles.  Let’s start with the abg article.   Its rabbit hole is in the second last paragraph; “You can read the whole thing in the included gallery but, put simply, what Tesla is proposing is an electric hybrid system that uses two different battery types to create an EV with tremendous range”.  We are back to the summary and the distinction between a physical system and the methods for its use or control.  It is not quite as simple as presented in this article.

Next up, is the article from Technology Review.  Straight away the rabbit hole appears; “Tesla has filed patents on the use of metal air battery”.  I would suggest this statement is ambiguous and could be misleading.  One read of “use” may suggest a method of operation, but the connotation is that it is the physical system that is patented in ‘521.  Again though, the ‘521 patent focuses on methods of controlling a system with two different battery types.

It is the last paragraph though that warrants a bit more discussion.  It reads in part “If there is a breakthrough in metal air, it looks like Tesla will be ready to use the technology.”  Again it is the connotation of the statement.  For sure, a “breakthrough” in the chemistry, physics or structure of metal air batteries will be important.  And yes, the methods of the ’521 patent may turn out to be useful for controlling a system having metal-air batteries.  The question though is whether the entity that makes the breakthrough, assuming it is not Tesla, would license any patents around it to Tesla.  For sure, if Tesla makes a breakthrough in the physical battery structure or chemistry they certainly appear to have thought about the battery’s control and implementation.  Maybe this is pedantic, but I felt the point needed to be made.

Lastly, is the article from GigaOM.  Here the rabbit hole appears in the first sentence.  It reads “ You probably heard about the metal air battery recently because Tesla was granted (a patent) around it.”.  And then “.. Tesla was granted a patent for an electric vehicle power train …”  Again I go back to the summary above.  Later, the discussion in the section “Tesla’s interest” is also a bit wonky.  But, it is the statement “As MIT Tech Review has written, Tesla is probably waiting for a breakthrough in a metal air battery and readying a patent when/if it happens.”  Without going into too much detail I go back to the discussion above.  If Tesla makes an advance in the battery chemistry or structure they will for sure file patent applications around this.  However, another party may make the advance, at which point they will more than likely file their own patent applications.

Moreover, there is much more out there that could be said about the ‘521 patent, including how the disclosed methods might influence the adoption of metal-air batteries.  I have not even touched on how the’521 patent might fit into Tesla’s portfolio or, more generally, the field of metal-air batteries.  But, I can say that there is need for more understanding of patents and what they they do or do not represent.