It was found the ‘521 patent is directed towards methods of operation of a hybrid battery system as opposed to a physical hybrid battery, as many seem to have inferred from Fig.1.  There was however one further bit of information that arose during the course of preparing this article that warrants discussion.

StreetInsider.com reported on some comments from a Global Equities analyst.  Namely, the analyst raised their target price for Tesla “…citing hybrid battery packs being developed by the company”.  It was also indicated that US patent applications, with publication numbers 20130181511 (‘511) and 20130187591 (’591), were filed in July 2013.  The reader was then directed to Fig.1 of the ‘521 patent, which was reproduced in the report.  Finally, an improvement in range and introduction date for hybrid battery packs were speculated.  Before going further though I need to make two editorial notes.  First, I will refer to the publication numbers ‘511 and ‘591 as the application numbers for ease of discussion.  Second, I will assume the analyst’s comments were presented accurately in the report. Onward.

I guess the place to begin the discussion is with the above two US patent applications, as the rest appears to hinge on these.  Portions of the first page of ‘511 and ’591 are reproduced below.   Of importance in both of these “portions” is the section titled “Related U.S. Application Data”.  The ‘591 application is a division of 12/962,693 and ’511 is a continuation of 12/962,851, which is a division of 12/962,693.  So what?  First, the ‘521 patent issued from application 12 /962,693.  Second, according to US practice a continuation and a divisional both contain the same information as the original application.  While I will not go further into the differences and similarities of various types of patent applications, at the end of the day the information in the ‘511 and ‘591 applications is the same at the ‘521 patent.  They again focus on methods of operating a hybrid battery system.  Another bit of information worth noting is that the ‘511 and ‘591 applications were filed on December 8, 2010 and the information was published on February 16, 2012. 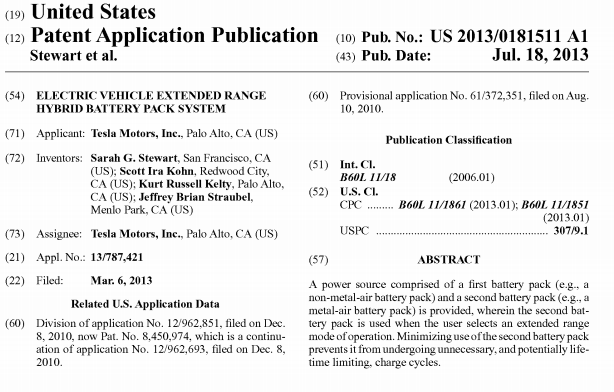 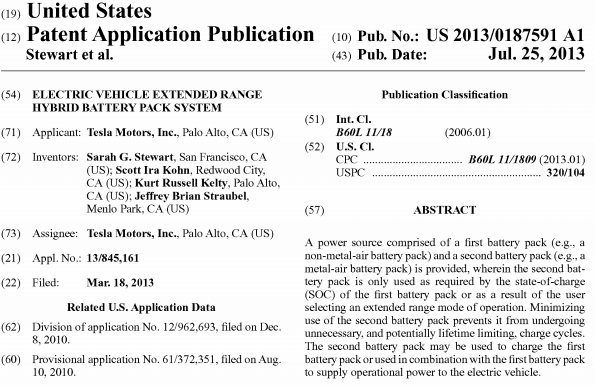 There are a couple of take-aways here.  It can not be said that the publication of the ‘511 and ’591 applications on July 18th and 25th, respectively, provided new information.  Yes there will be different claims for any patents that issue from these applications, but we are not there yet and the actual disclosed material has not changed from that of the ‘521 patent.  It would also seem difficult to prima facie draw conclusions from these documents without considering the actual battery pack system, and how the disclosed methods might impact timing and use of a hybrid system.  It can be said though that one has to think about what a particular patent document says or does not say, and whether a given analyst is aware of these details.  It is also wise to consider patents in terms of the bigger corporate and technological pictures.