The headlines are common; “Company X has Y patents” or “Patent A just issued to Company B”.  But, what do they mean?  Should, for example, they, and the accompanying article, impact an investment decision? The short answer is likely not. At a high level, a patent will not generate sales. The longer answer is much more nuanced. Patent A or some of the Y patents may be quite important to the company’s future. The challenge is determining this. If it is well written, and relates to an important part of the product a patent can protect revenue.

At the outset I want to consider a couple of common patent misconceptions.  I will then think about an example that received coverage in the media.

Many believe patents are granted for a product.  I have even seen the phrase “a product patent”.  You will commonly see statements such as “X has a smartphone patent”, implying that one patent “covers” a whole smartphone.

A patent is granted for an aspect of technology.  For the vast majority of patents these aspects will be at the “building block” level of a product.  As such one needs to consider whether the aspect in question is central to the product or if it is peripheral.  If it is central the owner may be able to, essentially, protect the whole product.  But, if it is something that might be designed out in the next generation or may be designed around the patent is probably less important.

In a very small number of cases a patent might protect a whole product, if the product is essentially a single concept and it is novel compared to what has come before it.

So, when a headline reads “X has a smartphone patent” it is usually a patent for a bit of technology that may be in a smartphone.

The scope of legal protection afforded by a patent forms the second misconception.  A patent’s legal protection is not defined by the Title or the Abstract, or a five word summary.  It is defined by the Claims.  The Claims are those awkwardly worded sentences at the end of a patent that next to no one discusses and most probably never reads.  A claim is very dense, it is written in a very particular format and often employs very precise interpretation of a good fraction of the words therein.  The most basic rule of thumb; the claims are much narrower in scope than all other parts of the patent.

In April 2013 the rumour mills were abuzz about Apple’s, then speculative, iWatch.  Much of the chatter at the time focused on published US patent application 2013/0044215.  Heck, ned even wrote about it.  The problem; apart from the patent drawings which some construed as looking like a watch, the patent detailed a slap bracelet with a flexible display.  The applied for Claims actually considered sensors in the bracelet that would alter the size of the “active” display, depending on the size of the wearer’s wrist, sorry, appendage.  Thus, the patent application was seeking patent protection for a very particular aspect of technology.  As we now know there was little of the technology disclosed in this application in the iWatch that was announced this September.  However, an a higher level, the patent indicated Apple was thinking about wearables. 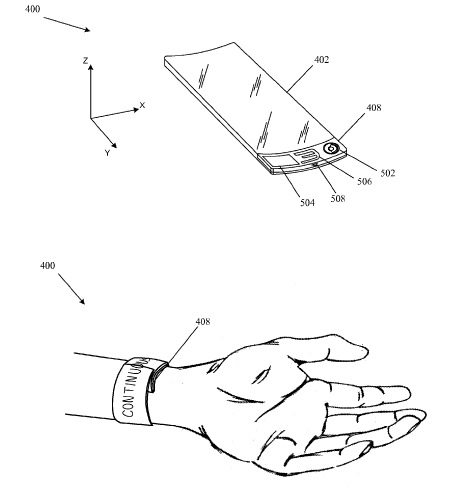 In the end, the common headlines are often the start of an article that has erroneous conclusions.  That said, a solid understanding of a company’s patent portfolio around their products a.k.a revenue can be a valuable arrow in the investing quiver.

In the end a good understanding of a company’s patent protection around their products can be a valuable arrow in the investing quiver.