Apple : the not “too sexy” technology developments

Recent ads have presented an apparent price difference between Apple and PC laptops. Phrases like “too sexy” or “too cool” are used with inference that this is an appropriate assessment of Apple offerings. There is no denying the effort Apple puts into design.

However, only considering design when comparing prices, as if the innards simply fit on a checklist, does not give due respect to Apple’s engineering. Apple has both historically advanced and continues to advance hardware engineering along with its more obvious efforts in design.

Apple has, in fact, set trends in hardware over the years that other manufacturers later followed. Trends that were made possible through technology innovation. Whether it be the adoption of CD-ROM drives in the early 90’s, dropping the floppy and moving to USB in first generation iMacs, or advancing heat management knowledge with the G4 Cube, Apple has a record of breaking new ground. Moving forward to the winter release of the 17” MacBook Pros, Apple introduced a non-replaceable battery with an advertised battery life of 1000 charging cycles or approximately 5 years. In describing the battery on their website Apple mentions a feature they refer to as adaptive charging, where the charging current is varied with consideration of the instant condition of the battery cells.

Going back a bit in issued US patents assigned to Apple one finds 5,998,972 which is entitled “A Method and Apparatus for Rapidly Charging a Portable Computing Device”. While the title suggests this patent is directed to methods for rapid charging, reviewing the specification (column 6, in particular) suggests the methods are very similar to those alluded to above. Namely, charging current is varied during a charging cycle based on the instant conditions of the battery. This is illustrated in Fig. 4 where an ideal charge curve 402, a traditional charge I-V curve 404 and I-V curve 406, the curve according to an embodiment of the invention, are presented. As is apparent from curve 406 the current is varied over the charge cycle. 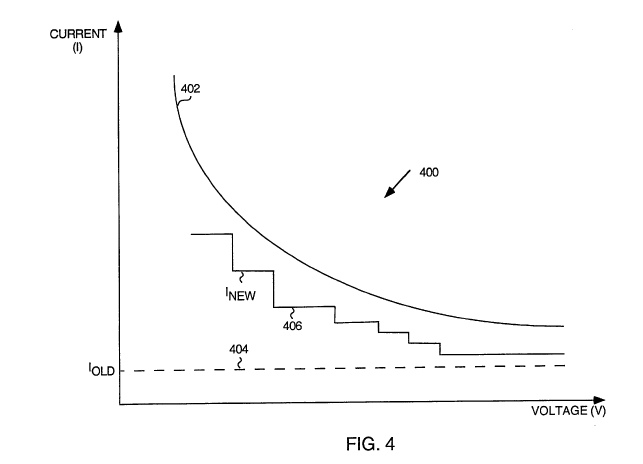 In the end Apple has been researching methods around battery charging for some time, likely implementing the assembled knowledge into the new 17” MacBook Pro battery. It is quite possible that we are witnessing a shift in the laptop battery paradigm, even if it is not all that sexy.