I am not sure if Apple lists metallurgy in any trademark “field” description, but they are active in the area. Take last week for example. Five of the Apple assigned patent applications published by the USPTO were in the field of metallurgy.

Anyone who has been watching Apple the last few years might guess these are associated with Apple’s work with liquidmetal.  Yes that is one word, not two.  Now this in itself is not news as blogs have already posted here and here, for example.  But, as usual there is plenty of room to push the understanding of the technology further.

Table 1 lists six recent published patent documents.  There are the five applications from last week and an issued patent i.e. US8,485,245 or ‘245 from earlier this summer, which ned has already discussed.  At this time I have not gone into last week’s five applications in detail, but that is fine for the purposes of this post.  The first stop in this journey is the face, or front, page of the documents to look at the bibliographic information.  Select bits of which are presented in Table 1. 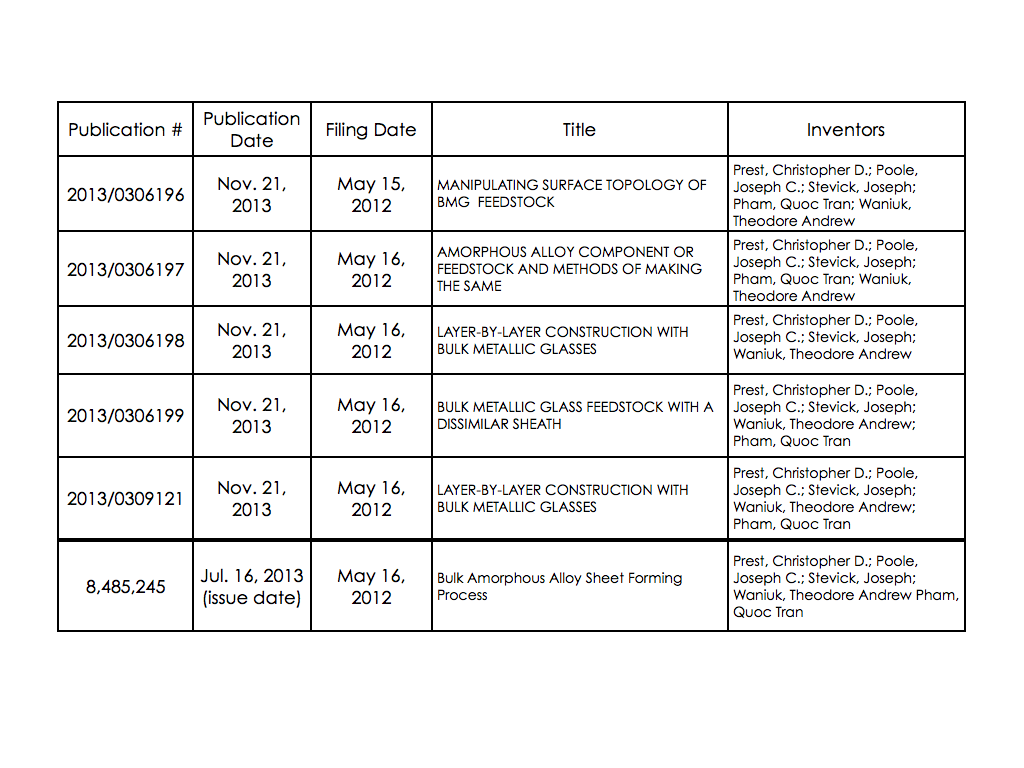 First, all six applications were filed in a two day window in May 2012.  Second, the inventors are more or less the same for all of them.  Right away one sees that the ‘245 patent that issued in July is from the same body of research as the five published applications from last week.  Now, the ‘245 patent generally discusses the formation of BMG sheets using a float glass process.  In July’s post I wrote: “ … I would anticipate that more will come from work on the processing of the 2D sheets into structures for the end devices.”

Well here it is.  If one quickly scans the ‘198 and ‘121 publications one finds approaches for or methods of making structures or features. For example, Figure 4 of the ‘198 document, presented below, illustrates the deposition of molten metal to build up a structure.  The base or substrate for such a process might be a sheet produced using methods of the ‘245 patent.  Similar concepts are presented in the ‘121 document where the methods around 3D printing, or laser cutting of sheet feedstock. 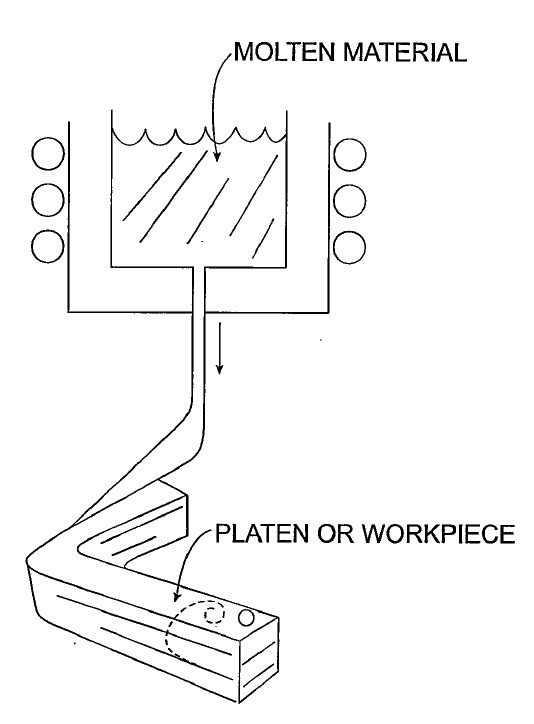 Moreover, we have now seen an approach for the formation of a 2D sheet in the ’245 patent, and techniques for building further structure or features in last week’s published applications.  At the end of the day when one looks at the six documents of Table 1 it is apparent that Apple is assembling a kit of metal forming techniques.