There is continued chatter around the possible appearance of a fingerprint sensor of some sort in the next iPhone, which at the moment is known as iPhone 5s. With this as the one sentence background there will be a story or two around something, anything even vaguely related to Apple’s fingerprint technology.

Of course, patent documents fall within this scope.  So when US20130154031 i.e. “Integrally Molded Die and Bezel Structure For Fingerprint Sensors and the Like” was published by the USPTO it did not take long for “Apple Invents a Fingerprint Scanner that Could be Discretely Hidden within the bezel of an iDevice, MacBook & Beyond” to appear.  Without commenting on the fact the latter title could have been said by Buzz Lightyear a few thoughts came to mind after a quick read through the ‘031 publication. 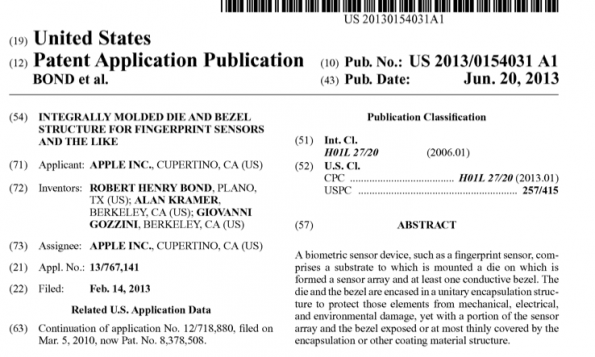 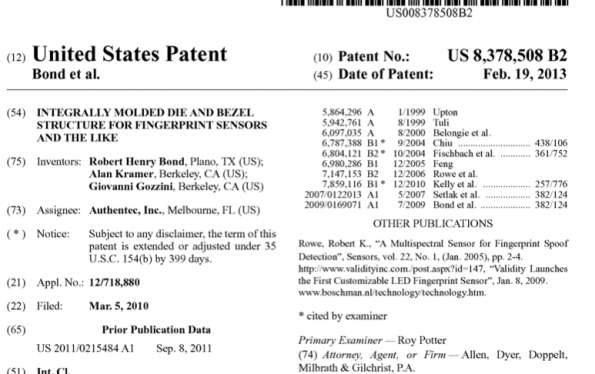 First, according to US practice the ‘031 Continuation does not contain any new subject matter when compared to the ‘880 application, from which ‘508 issued.  Thus, the information disclosed in ‘031 was public on September 8, 2011, see “Prior Publication Data” of ‘508.  In other words, well before any iPhone 5s rumours.  Second, we are also told at (73) that the ‘508 patent was assigned to Authentec.  So the disclosed technology was originally Authentec’s, before it was purchased by Apple.  I might also venture that ‘301 publication does not disclose any “new” inventing that has taken place at Apple.

At the end of the day there are still a number of outstanding questions.  These might include; why did Apple file a Continuation of the ‘880 application and what is the actual sensing technology that will be implemented in any future fingerprint sensor?  I put out some thoughts on this latter one a while back now.  As Sylvester the Cat very insightfully said “You never know where you’re going ’til you get there”.  Once again that seems like an applicable maxim.