Samsung, a patent application and a contactless fingerprint

the title of an article from VentureBeat last Friday. To me it suggests Samsung has received broad coverage for contactless systems. I felt uneasy. The general concept of a contactless fingerprint sensor is long since known and anything disclosed by Samsung would be an aspect of technology in this field.

Here we go again. I downloaded the document and wanted to see what was disclosed.

The Samsung “patent” in question is actually a published application; US 2015/0146943 (‘943). As such the claims have not issued yet so we do not know what will actually be patented at this point. The ‘943 application discloses a system and method for use in the contactless capturing of a fingerprint using an image input unit i.e. camera. It is indicated in paragraph [0006] of the Background that known contactless image-based systems may suffer from poor imaging if the user does not correctly align their finger. In paragraph [0007] it is stated that the performance of contactless systems may be inferior to contact systems. Therefore, one might say the ‘943 application is directed at mitigating or obviating at least one drawback of known systems.

Upon a first reading of the Detailed Description two aspects of the disclosed technology jumped out as important.

First, is the so-called guide screen. As seen in Fig 3, reproduced below, and described at [0044] the guide is a schematic (my word) drawing of fingers that is presented on a display. It is used as an aid in aligning a user’s fingers when capturing a fingerprint. There is considerable description around this feature.  Figures 3-6 present aspects of the guide screen and alignment.  When reading the disclosure I thought about what it might be like to align one’s hand by holding it over the screen, i.e. contactless.  I also noted that a phone’s camera is beside or separate from the display. In this case a finger over top of the guide screen would not be directly over the camera. 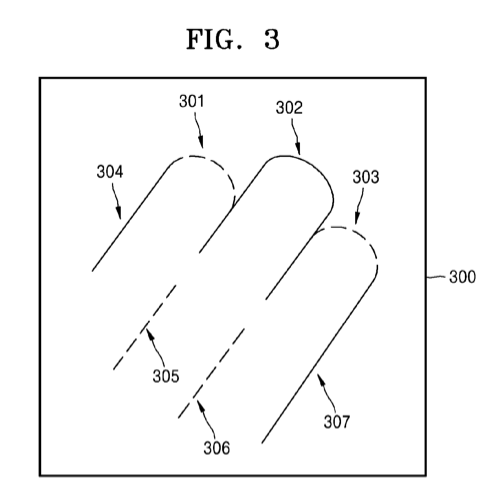 A second aspect, is the determination unit 130, see Fig. 1 and paragraph [0029]. It calculates/ considers whether the input image of a user’s hand is appropriate for fingerprint determination.  The calculations performed by unit 130 include geometric, see Fig. 5, and colour considerations.  Some details around the calculations are presented between paragraphs [0055] and [0064].  I wonder how easy it is to align one’s hand and if there is a misalignment if the user would be notified how to improve their alignment?