OK I’m back. Thinking back to Part I, terms such as whirlpools, vortexes and 5-dimensional memory are all part of the jargon based noise obscuring an understanding of the key technological development.

posted by Paul Boldt
in materials

In the most basic terms the ability to store data is the ability to store 1’s and 0’s.  More generally it is the ability of the storage medium to be in either a first state or a second state.  As is illustrated in Fig. 5 of the APL paper, reproduced below, a first and second state provide for a different sense of light polarization.  While there are many different parameters, or performance criteria that would need to be considered in a practical application the root is the above ability.  Extending from this basic concept, there are several technical questions left hanging after the four articles in question.  The ability to erase and re-write data, and the ability to bring a data storage system to a consumer application are two that will be considered here. 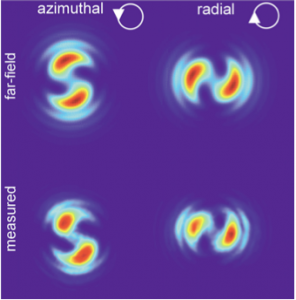 We are presented by bits of information related to the nature of data storage.  In particular what is occurring on the atomic or near atomic level that allows for information storage?  A few excerpts: “… lasers to create sub-wavelength anisotropic modifications in silica glass” (APL); “… ultrashort lasers can be used to imprint tiny dots called voxels on glass.” (Southampton); and “… the process makes the glass slightly opaque and polarizes the light” (Telegraph).  Again the APL paper probably provides all the best  information.  Subsequent descriptions largely muddy the water.

If we are simply aiming for a read only memory we do not really need to know the mechanism of manipulation within the glass.  One might postulate that data archiving applications do not necessarily require the rewriting of data.  It would certainly be an asset, but its absence might not be a show-stopper.  However, as other applications creep into the story we would like more information about the write and more particularly the re-write mechanism.  How is the glass altered by the laser?  Is the volume of material crystallized? Is the distribution of network modifiers in the glass altered?  We do not know at this stage.  It is particularly not clear to this author how you can manipulate a volume of atoms within glass such that the original manipulation is reversed.  Maybe you never actually return to the original state of the glass for a re-write.  Maybe the write process is independent of the volume’s original state.  Further, with the storage mechanism requiring the transmission of light through the glass there can only be one bit along a given optical path.  That said one could envision algorithms that guide the writing of data to “virgin” material.  Maybe the initial write is deep in the thickness of the glass and subsequent writes are higher up, as the optical detector is one the same side of the storage medium as the laser.  The “level” being identified in some record whose location is constant.

The commercialization of this technology is another matter.  Some details around the experimental set-up presented in the APL paper suggest there is a ways to go before any end products appear.  Namely, the APL paper notes “The stages (holding the glass sample) were computer controlled … to move in a spiral trajectory with steps of 1 micron, enabling in a complete scan to cover uniformly a circular area of 1.2 mm diameter in about 1.5 h.”  A few questions that arise include data transfer rate, power consumption, laser power and size.  While the Telegraph article indicates the authors have refined the techniques since the APL paper there appear to be orders of magnitude of improvement required in parameters such as write time.

In the end there is plenty of interesting stuff in this development, including the ability to create a volume of glass that alters the polarization of light, on a scale that may prove useful in data storage applications.  While the development is real and deserves respect it is certainly at the beginning of the commercialization path.  After reading the four articles one is left with some real technical questions, whose answer will determine the acceptance of the technology.  It is also the case that the three articles after the original APL paper present unreal expectations that only trivialize the technology.  It is only once these are peeled away the original development can be considered on its merits.