Capstone Turbine announced receiving an order from Israel-based HelioFocus for the modification and development of a C65 microturbine to operate on solar energy. While photovoltaic (PV) based solar systems are becoming the standard, the announced system considers an alternate way of capturing solar energy.

In a solar turbine, solar energy becomes the heat source instead of fuel.   The current system is said to be able to run on fuel when there is insufficient solar energy, such as at night.  So far, so good; solar energy by day and fuel at night.  But, there are some important bits of technology.  For starters, one has to collect the solar energy and impart a sufficient temperature rise to the air.  Logistically, one must integrate a solar collector, a solar receiver and a microturbine.

Let’s consider a few patents and see some things about what the various parties might be thinking.

United States Patent 6,748,742 (‘742 patent), assigned to Capstone, discloses a turbine system capable of using multiple fuel sources, a control system therefore and a method of operation thereof.  Of interest here is Figure 5, which is reproduced below.  It shows a  partial section end view of a turbine incorporating an external heat source 600.  Connection 376, collects air from the compressor.  This air flows through compressor discharge port 376P and travels through heat exchanger/mixer 606 where it is heated by external heat source 600.  Heated air is brought back to the turbine via inlet port 384.  In the current system, external heat source 600 would be solar energy and the exchanger 606 would be a device appropriate for transferring this energy to the air. 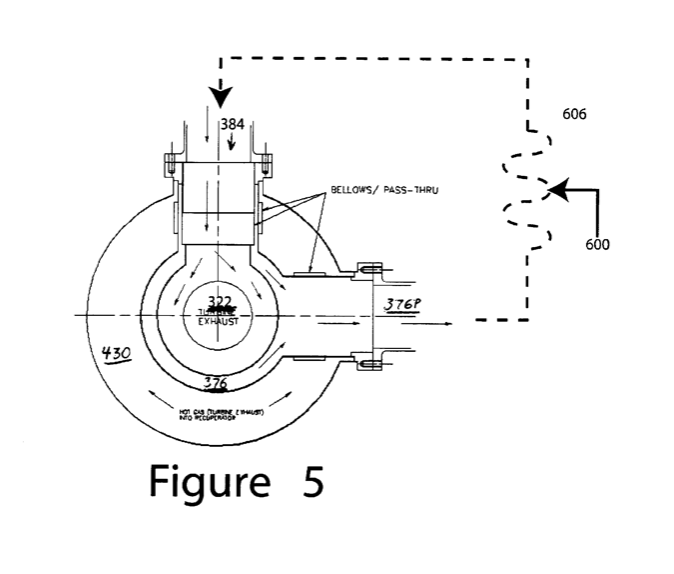 The question now is heating the air.  A bit of digging found a Prof. Jacob Karni is associated with HelioFocus.  I then found United States Patent 7,042,857 (the ‘857 patent) to Karni.  The ‘857 patent discloses a Solar Receiver with a Plurality of Working Fluid Inlets, which might be suitable for use as the exchanger 606.  Figure 1 of the ‘857 patent, reproduced at top, presents a solar receiver 2, having a receiver chamber 12, inlet ports 17a-17d and outlet port 18.  The nature of the fluid flow from inlets 17a-17d is discussed, as is the use of solar absorbing particles within the fluid to assist in the transfer of energy to the fluid. It is also mentioned that the receiver may implement a single inlet for the working fluid, which may be free of absorbing particles.  Test results presented in Table 1 indicate an air exit temperature of 1630 ºC for a particle loading of 4.5 g/m³.

This briefest of surveys found patents disclosing technology associated with allowing multiple fuels and the transfer of energy to the air, and impart a rise in temperature.  These are early days, but further down the road system cost, efficiency and real estate requirements will be of interest.  It will also be of interest to see if the above technology becomes part of any system.  The transfer of energy still seems to be an area of interest and development.