The other week there were a few articles published

posted by Paul Boldt
in materials

here and there, for example, around GE’s work on the magneto-caloric fridge.  It is a pity there was not more coverage.  These days though if you do not wiggle “app” into the title the masses neither consider it technology nor pay attention.  Cooling is though quite an important area in our everyday lives, whether it is domestic or industrial.  It is also one of those technologies that seems ripe for a paradigm shift.  To this end I have always had thermo-electrics on the radar screen.  Onward it is.  Let’s give the magnet fridge story a bit more attention.

so .. what is the magneto-caloric effect?

In one sentence, paraphrasing wikipedia, the magneto-caloric effect allows for the ability to change temperature in a suitable material by exposing that material to a changing magnetic field.  OK, that sounds simple enough.  This particular property of some materials has been known for more than 100 years and it is used in niche cooling applications.  The devil must be in the details.  It must be in that second level of development.  It is not the conceptual idea, but the development of this idea such that it has broader applicability.   I have discussed this before.

how does this concept apply here?

First, it is back to wikipedia.  The two example materials systems are gadolinium (Gd) alloys and praseodymium (Pr) alloys.  What the heck are those?  Now from the one article we see that the GE team has developed a system based on a nickel/manganese alloy.  Bazinga! We have a materials system based on common metals.  Now there will likely be a specific alloy composition with possibly some rarer metals in minor amounts or maybe a preferred orientation, but that is to be expected.  GE will have certainly filed IP around this development.  It is potentially significant.

Second, we go to the existing applications.  It is back to wikipedia.  Here they mention that traditional systems have used in ultra-low temperature (likely UHV also) applications.  While the wikipedia reference states the effect is strong, working in a UHV system suggests to me that the actual amount of stuff to be cooled i.e. the cooling capacity is not all that large.

Now ,it is back to GE and their publicity shot, which is reproduced below.   Beyond the question of whether their choice of beer is worth cooling, cooling a beer itself, let alone that it is in air, likely requires a larger cooling capacity than the above traditional applications.  One should anticipate developments around both the actual magneto-caloric material and in the system around it.  GE will certainly to working on the cooling system.  A first look at published patent applications assigned to GE indicates this is indeed an area where development is occurring.  A case in point is US2011/0162388. 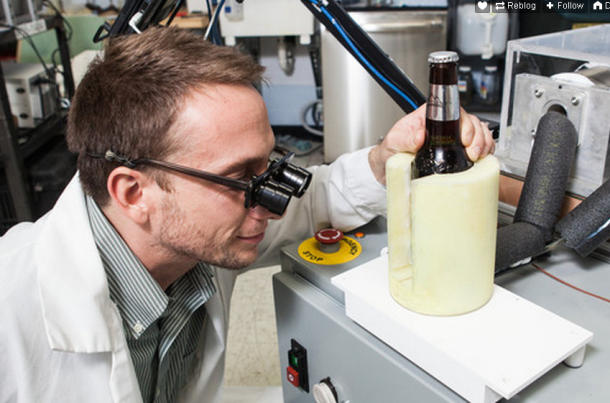 At the end of the day we see an interesting, for now little, technology story developing here.  It appears that GE is on its way to developing a system that implements common metals and has an improved cooling capacity.  Time will tell how the story develops.  Even if it is not an app, a 20% energy savings would be serious and worthy of attention.