This past Monday saw an editorial entitled “Technology and the governance gap” in the Globe and Mail. In one sentence it discussed how disruptive technology might alter the labour force and the need for the government to be prepared for this. The article had some interesting points, but fell victim to a whirlwind of trendy buzzwords. Here I will think about the accompanying image, which I have reproduced below. In particular I want to think about whether it represents the pending disruption.

posted by Paul Boldt
in Ottawa

We are not told what it is, but it sure looks like the little fellow on the left is Domino’s autonomous pizza delivery robot that is being tested in Europe.  I guess it is not a surprise because he is the paradigm of tech.  He is a robot.  He is autonomous and he brings us our favourite Friday night meal.  Looking at the picture he is about 45 cm tall, has six cute little wheels and an antenna to call home.  At the shop he is loaded with a pizza or two, some dipping sauce and maybe a few drinks.  They would of course have to be non-alcoholic because he is not good at carding yet.  His hold is full, so you send him on his way. 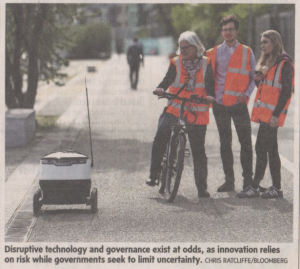 (Source: The Globe and Mail)

You always get a bit nervous though because he is quite innocent and it is a dangerous world out there.  There might be all sorts of weather; rain, wind and snow could all be there.  It might even all come on the same day.   Winter driving is usually fine though because he does get his snow tires before the first snow.  When he was younger he could drive on the sidewalk, but these days he has to travel on the road.  There is always the chance that some careless SUV or pick-up runs right over him; so much for the pizza.  Then there are the dogs that might chase him, making him disoriented as they jump around in front of the cameras.

The big worry is when he has to travel to the wrong side of the tracks.  I can just see it.  A pick-up truck stops in front of him, he is hoisted up into the back and a blanket thrown over him so he can not see.  The poor guy.

While he often makes it to his destination it is another thing to deal with picky customers.  He is slower than that the old economy car with a driver.  Those little wheels just can’t keep pace with city traffic flow.  Of course when he arrives at a destination he can not ring the doorbell or climb the stairs, so the customers have to go to the street to get their pizza.  I am of course only joking about the doorbell, because there would be a notification on your smartphone as he arrives.  He still can’t climb stairs though.

What about multi-storey buildings?  If there is security he again waits outside and notifies the customer.  Just like doorbells, elevators are a disaster.  The buttons are too high, and any smart elevator that communicates with the internet to receive a notification has to be secured.  Presumably, someday he will establish a secure connection to the elevator’s controls and ride up to the desired floor at will.

All joking aside there are many things that will change with ever evolving technology, and it is advantageous to be aware of this before it happens.  The article though is plagued by the choice of a gee-whiz marketing tool to represent it.  Yes, some of the gee-whiz projects seem just to fantastic as a whole, but there will be developments and spin-offs along the way.  I always like taking a critical look, to maintain a sense of reality before joining the mob.