Apple’s TouchID fingerprint sensor is a couple of generations old now. In this time it has resided in the home button. It showed up in the press a few days ago with the publication of Apple patent application US 2015/0036065 (i.e. ‘065).

There were a few articles out there, including the initial one from AppleInsider. In the end there was not much buzz around the publication of ‘065.

I did not though find that to be a deterrent.  First, there are likely some interesting use scenarios that could arise when a fingerprint sensor is located within the display stack.  Second, ‘065 presents a nice example of the development of a technology to overcome a problem.

A fingerprint contains ridges and valleys. A fingerprint sensor detects a difference in a “signal” associated with these ridges and valleys. The concept is analogous to an “ink” fingerprint where the signal is the ink and the difference is that the ink only contacts the ridges. Here though detection of the signal requires a grid of sensors, allowing one to say that point x,y on the grid is associated with a ridge or a valley. As indicated in ‘065’s Background, historically, the integration of a fingerprint sensor into a display stack has not been successful. As indicated in paragraph [0003] of ‘065 the sensor may interfere with the display if it is located above it, or it may prove difficult to obtain a signal if the sensor is located below the display.

It is time to dig a bit deeper into the technology.

So, how does ‘065 approach the above integration problem? As In any patent disclosure there are numerous embodiments, or alternatives, presented. I want to consider one element of the disclosed technology, the “blind” vias. These are first depicted in Fig. 3A, reproduced below, and discussed in paragraphs [00534] and [0054]. Further, in paragraph [0056] it is indicated “The blind vias 316 can carry the signals through the cover sheet 300 with minimum degradation.”.  If I were to then speculate a bit I might think that the finger print sensor could then be made with lower sensitivity as the “signal has been transmitted through the cover sheet with minimal loss in the strength thereof. One might then speculate that the fingerprint sensor could be integrated in the display stack and be less likely to interfere with the display. 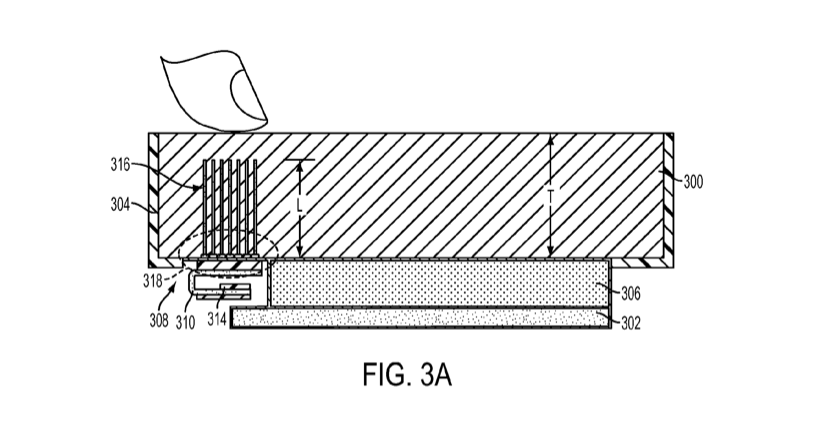 Finally, I want to touch on the claims. As with any published application, those of ‘065 are the as filed claims. The claims that finally issue may be different from those published here. While still in the realm of speculation, one needs to think about those aspects of the disclosed technology that are novel. It will be of interest to see what claims are finally issued and what, if any, of the disclosed technology is incorporated in future products.