apple and the non-rectangular battery

I admit it. I was really hoping that my next post did not involve Apple.

I did though succumb to an interesting article in Wired about Apple’s new terraced batteries. I can also say that I felt this development has some legs. One can see numerous use scenarios for terraced battery shapes to fill non-rectangular spaces.

The Wired article drew our attention to an Apple patent application published in January 2012. This application just recently issued to US patent 8,940,429 i.e. the ‘429 patent. I would like to dig into the ‘429 patent a bit and see where it takes us. I would also like to consider whether this is “the” terraced battery patent as inferred by Wired or is it an element in a broader strategy.

As a first pass, the ’429 patent discloses arrangements of “electrode sheets”. These sheets are then connected in parallel to form a battery. An example of this structure is presented in Figure 1, which is reproduced below. In the depicted cell the electrode sheets 102-108 are of various sizes and when stacked produce a terraced arrangement. It is also indicated that the sheets 102-108 may have a rigid plate 114 thereunder to provide additional mechanical strength. From here, numerous configurations of electrode sheets and overall battery shapes are disclosed. In one configuration, see Figure 2, the individual sheets have a hollow portion in the centre thereof, giving the battery a ring-like shape. Other components, such as electronics may be placed in this middle “hollow” region. It is currently believed that this latter structure is of interest in the ’429 patent. 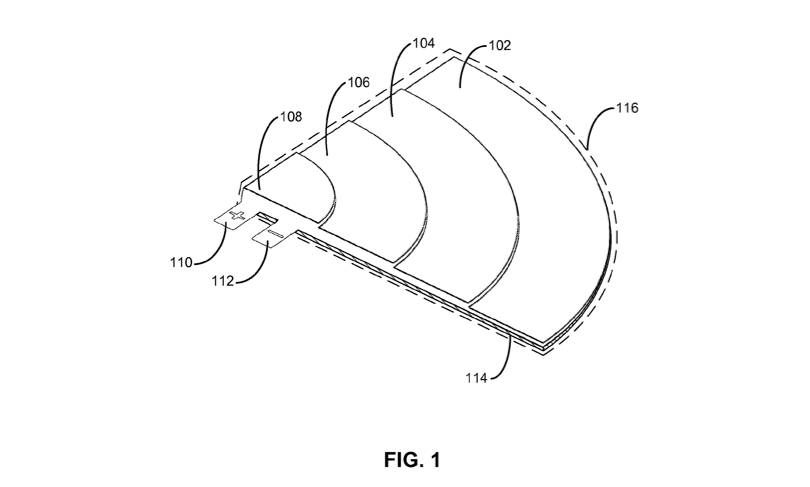 All is good so far, but what about the question of whether the ‘429 patent is “the” patent or is it a piece of a larger battery technology puzzle. After an initial reading of the ‘429 patent, including the claims, it is evident the ‘429 patent is an element of a broader technology strategy. In particular, the ‘429 patent seems to focus on embodiments with a “hollow portion” in the electrode sheets i.e. a particular physical structure. Does such a structure require other physical and chemical advances in the battery? It quite possibly does. It is considered likely that there are other patent applications around further aspects of chemistry and structure that facilitate the operation of a battery having a structure as outlined in the ’429 patent, yielding a larger a broader technology strategy around the tailoring of a battery’s shape.