a patent, a drone and unfortunate coverage

It was all there;

drones, patents and a popular publication.  What could go wrong?

The short answer is everything.  There was no clear direction to the discussion, an understanding of the technology was missing in action, and there were outright errors in the discussion of patents and their legal protection.  This is well enough, but what do I want to extract from a patent?  I want to know the advance in technology, where it fits in the broader picture and for what aspects of the technology is protection being sought.  Now that I have revealed my wish list it is time to look at Samsung’s US 9,891,885  i.e. the ‘885 patent.

“Samsung patents a flying display that’s controlled by your eyes” was TheVerge’s title.  Reading the title brings possibilities, ideas and questions to mind.  First, I thought the patent may consider specifics of how the control system monitors a user’s eyes, how information is “converted” into control signals and how the drone’s flight is controlled, and if there are specific aspects of or configurations to the flight system.  Second, I thought about the practicality of the system and how a flight system would maintain the desired relationship to the user in the case of wind or rapid motion.  The user experience started to appear vulnerable.

Is there prior art?  With respect to the general concept one could envision a remote controlled blimp or plane with a display predating the flying drone concept.  Thus, the legal protection, or Claims, were likely going to be narrower than suggested by the title.  I want to think about the technology and the protection i.e. Claims separately.

what technology is outlined in the’885 patent?

If one thinks about flight in general one needs a physical flight system i.e. propulsion and steering and a means of controlling the flight system.  The latter would receive input from sensors and controls and output information or instructions to the flight system.  Both of these areas are considered in the ’885 patent.

A higher level view of the control system is outlined in Figure 1, reproduced below.  The  description of this system begins at Col. 5, Ln. 62.  In general the discussion strikes as more of an overall system, having desired blocks as opposed to detailed specifications.  For example, it is simply indicated that a sensor unit is capable of receiving gestural input from a user, without providing details of how this might be realized.  Again, this is a higher level discussion with reduced detail around specifics.  There are numerous other, aspects or abilities of the system discussed, including the ability for wireless communication within a WiFi network.

What about the flight system?  It is illustrated in Figure 2, reproduced below.  Again the discussion is at a higher level, leaving out specific details of the system.  Somewhat unexpectedly there is detail around the incorporation of the propellor 112 in the joint manipulator 113.  However, I did not find a discussion of how the propellor and joint manipulator configuration relates to the drones capabilities.  It was not clear if the propellor configuration is particularly relevant to the device’s operation.  Again, I am thinking about what might needed to provide a stable, viewable display, while also allowing control via gestures, including eye movements. 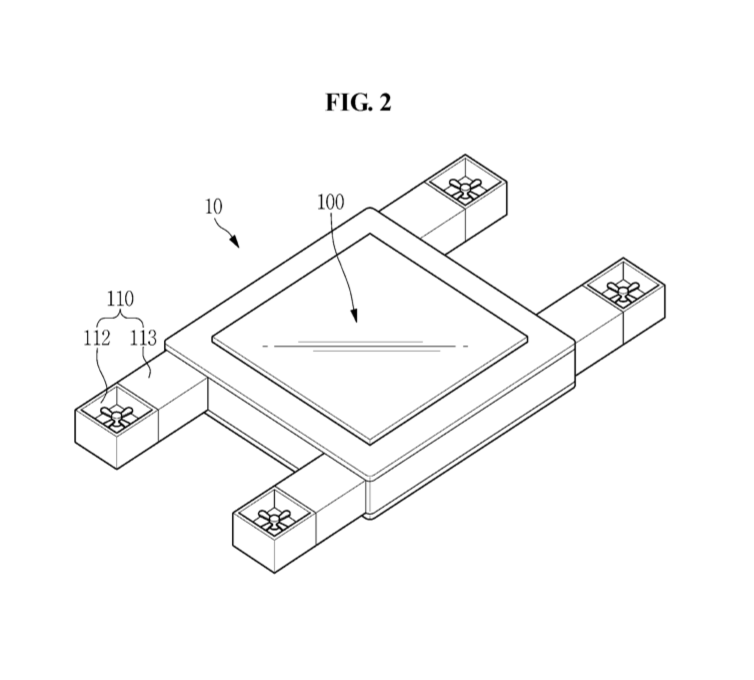 I have to note that the drone itself seems pretty small and is likely directed to indoor flight.  Examples of the display (col. 4, ln. 51 – col. 5, ln. 17) include a smartphone and a tablet, suggesting that one would have to be quite close to the drone to see detail on the display.  With such a small display, the control and flight systems would need to be robust.  They have to ensure a stable flight and can react fast enough to avoid hitting a user’s head.  Thinking further, it is not clear why you would need a drone for your phone.  I might think of putting it on to a stable surface.

What about the legal protection?  What about the Claims?  TheVerge’s article very oddly and incorrectly states “The solid lines in the patent’s illustrations are its claimed features”.  I have worked with patents for over twenty years and have never come across this concept.  The Claims define what is protected.  Here, Claim 1 is the sole independent claim, so lets look there.  It brings attention to both details of the control system and the flight system.  There are other things I could say about Claim 1, but that is for another forum.

Generally, the ’885 patent strikes as a higher level wish list of functionality.  There would certainly be further detail along the way to bring the functionality of the various blocks in Figure 1 to life.  When reading patents or articles about them one needs to remember that patents are organized descriptions of particular aspects of a technology.  They are never as simple as an article’s title may suggest.  Then there is the legal protection that is defined by the Claims.  Interpreting both of these aspects of a patent requires experience.  This is pretty much always missing in articles found in popular publications.