We are now less than one week away from Apple’s September 9th Keynote and the widely rumoured launch of the iPhone 6. Of particular interest at ned will be the likely introduction of the A8. Yes, there will be new pixel counts, new sensors and new capabilities, maybe including the rumoured NFC,

but the A-series processors are showing Apple’s ability to customize and thereby differentiate itself on a fundamental level.  No, I am not talking about whatever process or foundry will be used to fabricate the A8.  I am talking about circuit design.

As usual though it is useful to take a look back before looking forward.  Thus, let’s recap what the current iteration of A-series processor i.e. the A7 told us.  The A7 was of course used for the iPhone, the iPad Air and the iPad mini.  Pretty much everything that was written about the A7 was related to its use of a 64-bit CPU.  Of the various opinions out there I tend to lean toward the notion that the decision to move to this architecture had more to do with a design roadmap than the specific capabilities of the A7 or any device in which it found itself.  That said there was much more to the A7 than the CPU that seemed unmentioned. 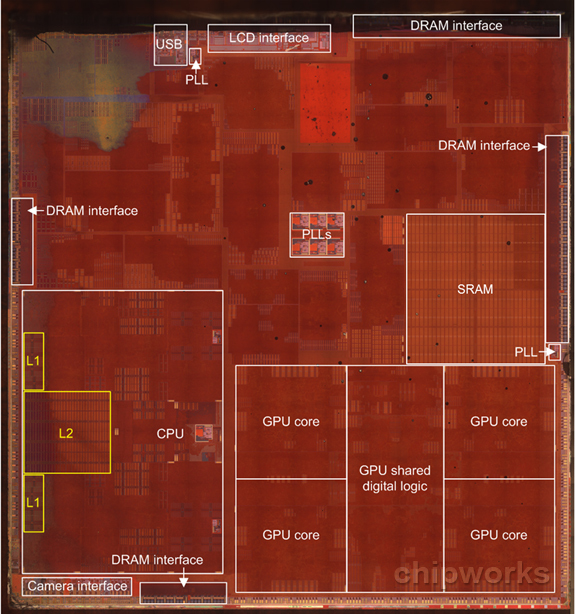 First some numbers …  It is instructive to look at the A7 in terms of a normalized process geometry.  It is known that the A7 was fabricated with a 28 nm process, while the A6 and A6X used a 32 nm process.  After a rough calculation one can normalize the A7 measurements to a 32 nm process, allowing a comparison of die sizes.  This was done in our article on the A6, which compared it to all previous generations.  The A7 die turns out to be the largest to date at 136 sq. mm while the A6 was 97 sq. mm and the A6X was 124 sq.  mm.  Thus even though there was no A7X, in terms of die size, the A7 seems more closely related to “X” side of the family.

First, the GPU, or GPU and other accelerators, of the A7 had to be selected for the maximum number of pixels.  This is roughly 3.1 million for the iPad Air and mini, the latter of these having a Retina Display.  The iPhone 5s though comes in at 730k or 25% the number of pixels of the two iPads.  The GPU would appear to be overpowered for the iPhone.  Second, is the fingerprint sensor of the iPhone 5s.  In last September’s Keynote it was indicated that fingerprint data was stored on the A7.  When the A7 die was in fact seen one found a large block of memory (SRAM) on the right side above the GPU block.  It consumed 6 % of the die.  If this is in fact for storing fingerprint data it’s use is less apparent in the iPads as they do not sport a fingerprint sensor.  Again, the A7’s design reflects specific capabilities in the end devices, not the smallest possible silicon area.  These examples seem instructive when considering the design for desired functionality, rather than use of silicon.

I have been watching the A-series of processors from the initial A4.  With each generation there has been an increase in the number of circuits, as seen in the normalized die sizes.  The A7 is no different.  This particular iteration poignantly  showed Apple’s designing to support desired features and performance as opposed to the minimization of cost … sorry bean counters.  The A7 made a fundamental move to a 64-bit CPU that seemed to catch the industry by surprise.  I think the A8 will continue the drive to customization and will, in all likelihood, build on Apple’s design choices for the A7.  I wish I had the space to say more.