the foldable phone is here

Both Samsung and Huawei introduced foldable phones in recent weeks. They are not the flip phones of past. These phones fold open to provide a screen that is roughly double the size of the phone, or double the size of a “standard” smartphone display.

How do you make a foldable display?  As might be anticipated there are many levels to this, but a few themes or areas of innovation come to mind.  The first is the display.  It must be bendable; think flexible OLED.  The second is software.  Both the Samsung and Huawei phones provide a traditionally sized display and the larger, fold-out display.  In  their introduction Samsung discussed the software required to smoothly switch from one display to the other.  The image transitions from one display to the other based on the phone’s orientation.

A third area of innovation is the hinge.  Samsung highlighted their hinge in the S10 Fold’s introduction.  It appeared to have numerous interlocking gears, with space therearound for electrical connections.  The hinge was said to provide smooth and stable motion over 200,000 openings and closings.  It strikes that the hinge needs to be done well.  However, there is also a balance between the desired operation and the hinge’s size and weight.  So, it has to work well, while not excessively impacting the ergonomics of this new genre of phones.

The introduction of these two phones made me think of various articles about foldable phones that have appeared over the last few years.  The most notable one was from Patently Apple.  The headline was “Fake news: A Report Claims that Huawei Received a Foldable Smartphone Patent ahead of Samsung and Apple”.   The article seemed oddly personal.  It was also an ironic title because the article criticized another article while itself repeatedly using the phrase “a foldable smartphone patent”, almost suggesting there was some universal patent for foldable phones.

I did not comment on this article at the time, but recently I took another look at all three patents mentioned in it.  They all consider technologies associated with the foldability of a phone.  It is time to think in more detail.

Huawei’s PCT application WO2018/054291 was at the centre of the Patently Apple article.  The Figures, Fig. 2 and 6 reproduced below, make it apparent that it discloses a hinge. In passing, the hinge of the Huawei phone appeared to, at least generally, resemble the one disclosed in this patent. 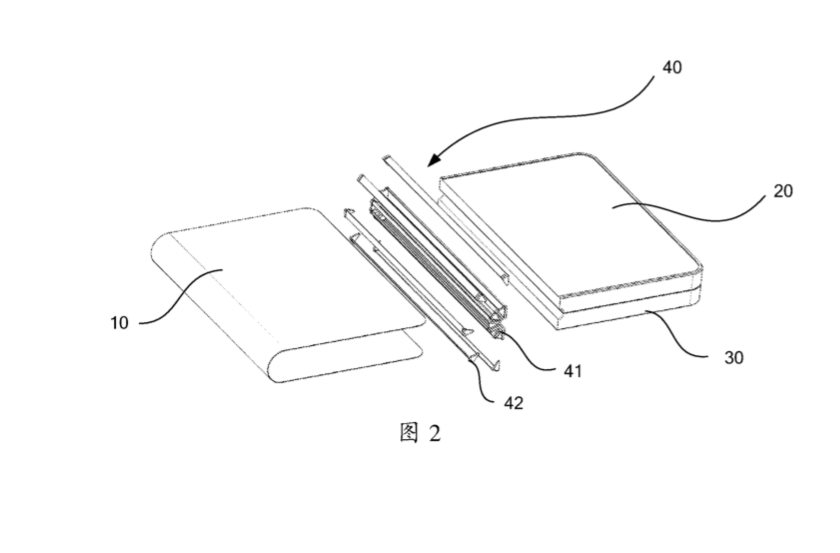 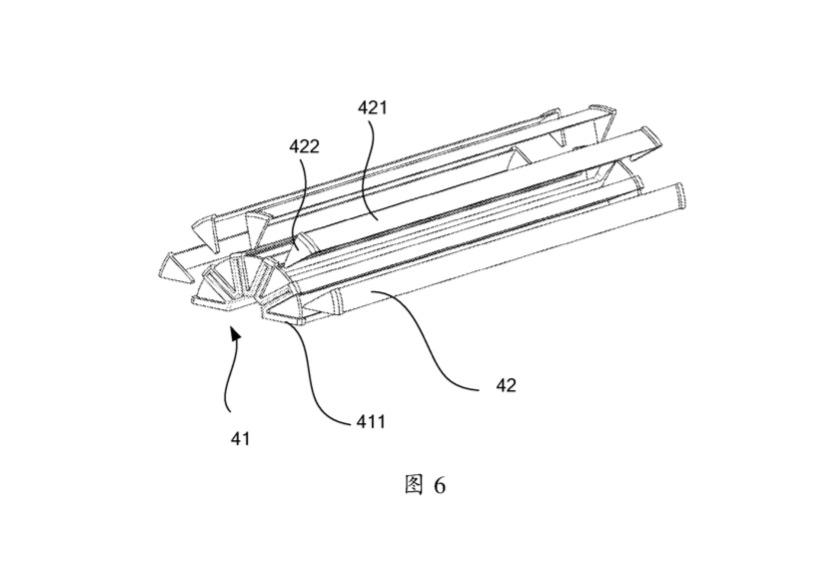 Samsung’s US9,406,734 discloses a display having a bendable area and a flat area.  It notes that the tensile and compressive forces are different in these regions, and are a function of whether the display is folded or not.  Figures 7 and 8 are reproduced below.  Figure 7 illustrates different sizes of pixels in these two areas.  Figure 8 indicates there are also different sizes and thicknesses of RGB sub-pixels.  The arrangement of the driving transistors and capacitor in the pixel is also discussed. 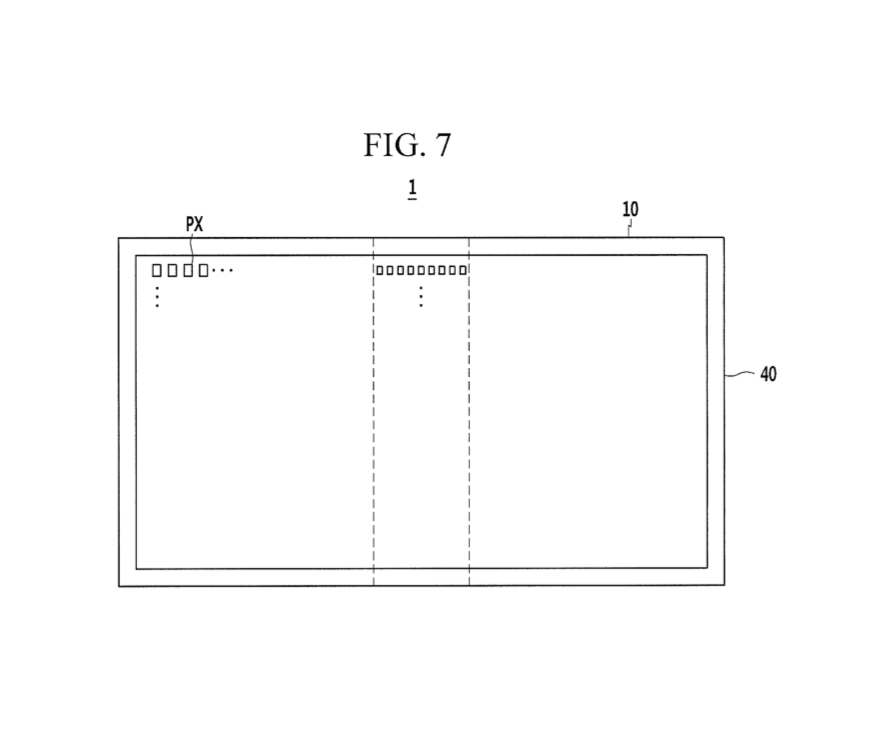 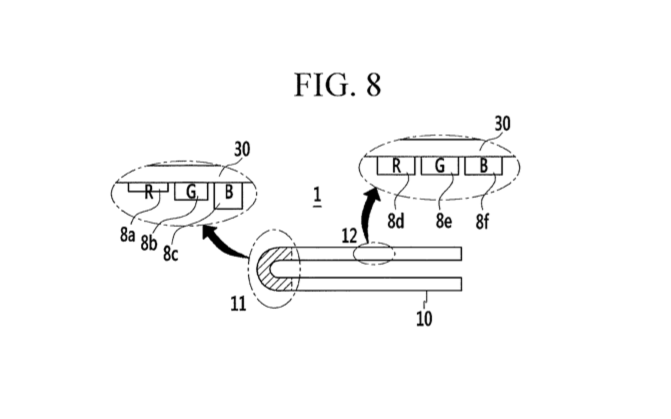 And finally, Apple’s US9,485,862 discloses the use of carbon nanotubes.  The ’862 patent discusses possible failure of metal lines a.k.a signal paths on a flexible PCB.  The bending and flexing may lead to cracking in these lines, which may, in turn, lead to failure of them.  It describes lacing carbon nanotubes in the metal lines, or in a polymer matrix to become the primary conductor.  Fig. 17, reproduced below, illustrates these two structures, where conductor 168 is carbon nanotube-based. 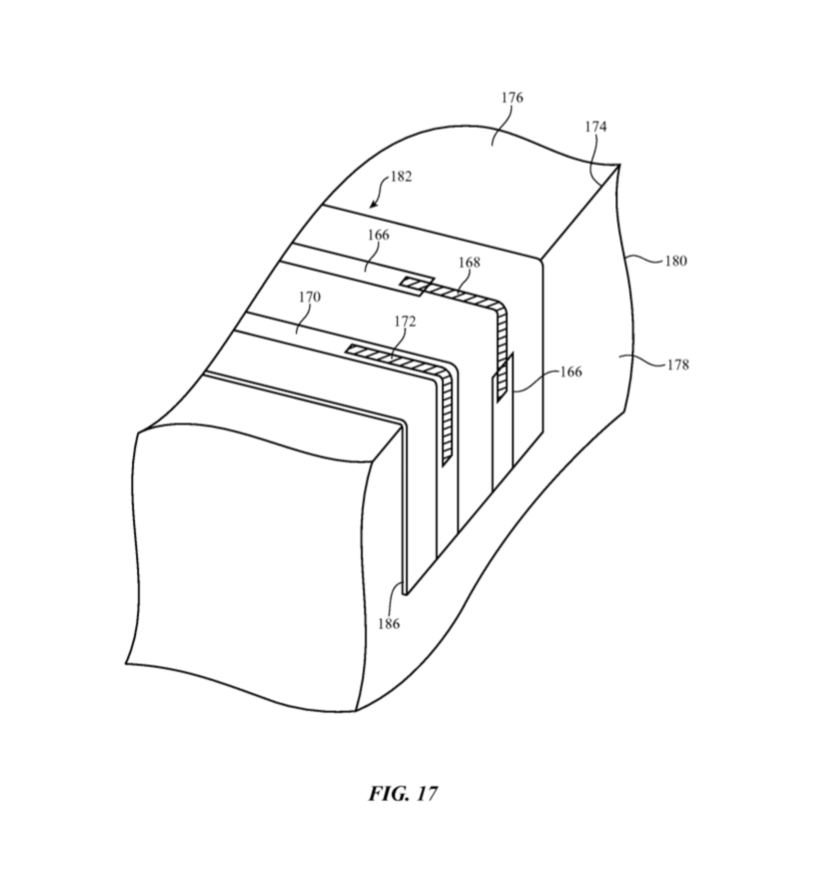 All three patents disclose a technology related to foldability.  There is a hinge structure, a pixel structure in foldable and non-foldable regions and a carbon nanotube structure for a folding printed circuit board.  None are some sort of universal foldable smartphone patent.  As should be anticipated these patent documents disclose technology that may address problems or hurdles associated with foldable phones.  It would be of interest if these or other patent documents Claim a structure that is important to usability or differentiates the end product from others.